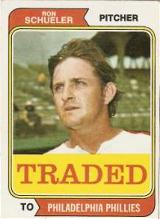 Ron Schueler was a major league player and coach but is perhaps best known for his work as a general manager.

After spending five years in the minors, Schueler pitched for four teams over an eight year major league career. In total, he appeared in 291 games and amassed a record of 40-48, to go along with a 4.08 ERA. Schueler tossed a pair of complete game shutouts in his major league career. Both occurred during the 1973 season as a member of the Atlanta Braves. He also pitched two-hitter on July 6 of that season, against the New York Mets, walking only 1 and striking out 9.

Atlanta traded Schueler to the Phillies following the 1973 season. He spent three seasons in Philadelphia, winning 16 games, while losing 20. Schueler was purchased from the Phillies by the Twins in 1977, with whom he won eight games. He finished his career with a two year stint in Chicago, playing for the White Sox.

From 1979-1986, Schueler served as pitching coach for the White Sox, Athletics and Pirates.

"Point B to Point C"

Schueler spent four seasons evaluating talent in the Oakland organization before joining Chicago's front office. He replaced Larry Himes as general manager of the White Sox following the 1990 season. White Sox owner Jerry Reinsdorf deemed Schueler to be the man that could guide the Sox from "point B to point C". Instead, Schueler found himself responsible for dismantling and rebuilding the Sox.

Upon taking over as GM, Schueler inherited a White Sox team that had just won 94 games and possessed a nucleus of young talent, highlighted by Robin Ventura, Jack McDowell, and Frank Thomas. Schueler brought in several high-profile veterans in an attempt to push the Sox to a World Series crown. Tim Raines, Steve Sax, George Bell, and Bo Jackson were just some of the new faces added on the South Side. Bell came at the highest cost, as the Sox traded Sammy Sosa to the Cubs in return for the aging slugger. In 1993, the team won the AL Western Division, but fell short of the World Series. Schueler signed Julio Franco and Darrin Jackson to bolster the White Sox in 1994, but hopes for a pennant were dashed by the strike. The team stumbled in 1995, and fell short of the wild card in 1996. Looking to add a spark to the team, Schueler signed slugger Albert Belle prior to the 1997 season.

On July 31, 1997 the White Sox trailed the Indians in the Central division by 3.5 games. Robin Ventura had recently returned from a severe ankle injury. Rather than make trades to better the Sox for a playoff run, Schueler sent starters Wilson Alvarez, and Danny Darwin, and closer Roberto Hernandez to the Giants for a laundry list of young players, composed of Keith Foulke, Bobby Howry, Mike Caruso, Ken Vining, Lorenzo Barcelo, and Brian Manning. The trade created a public relations nightmare for the organization. It would take several years for the Sox to regain success on the field and at the ticket office.

Hey, The Kids Can Play

Schueler and the Sox spent 1998 and 1999 cultivating young talent and exposing fresh faces to the major leagues. Several players emerged as potential stars. Magglio Ordonez debuted in 1997 and made his first all star team in 1999. Carlos Lee homered in his first major league at bat. Chris Singleton hit for the cycle. Mike Sirotka, Jim Parque, and Kip Wells showed promise in the rotation, while Bobby Howry, Keith Foulke, and Bill Simas formed a solid bullpen trio.

Prior to 2000, Schueler added veterans Jose Valentin and Cal Eldred to the pool of young talent. The White Sox looked ready to make good on their advertising slogan: "Hey, The Kids Can Play". Sure enough, the Sox exploded on the scene with 95 wins. Schueler added several key parts along the way, including Herbert Perry, Tony Graffanino, and Charles Johnson. The young Sox won the Central division, but fell short in the ALDS against the Mariners.

Schueler retired at the conclusion of the 2000 season. He left his successor, Kenny Williams, a 95-win team and a highly rated farm system. He then spent time as senior vice president and special consultant to chairman Jerry Reinsdorf. He was a special assistant to the president for the Chicago Cubs in 2003, and special assistant to the general manager for the St. Louis Cardinals in 2005-2007. In 2008, Schueler moved to the San Francisco Giants as "Senior Advisor, Player Personnel". In November 2009, he was lured to the Washington Nationals front office by Mike Rizzo.