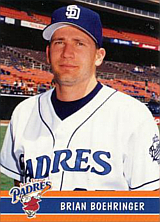 A native of St. Louis, Boehringer played college ball at UNLV and was selected by the Houston Astros in the tenth round of the 1990 amateur draft. He did not sign, and was then taken by the Chicago White Sox in the fourth round of the 1991 amateur draft. He made his pro debut that summer and split time between the GCL White Sox and Utica Blue Sox before his season was cut short by a shoulder injury. Prior to the 1994 season, Boehringer was dealt to the New York Yankees for Paul Assenmacher. With the Albany-Colonie Yankees that year, he went 10-11 with a 3.62 ERA and was second in the Eastern League with 5 complete games and fourth in the circuit with 145 strikeouts.

He made the Yankees Opening Day roster in 1995 but spent most of the summer with the AAA Columbus Clippers. With the Clippers, he was 8-6 with a 3.38 ERA in 17 starts, but he struggled in New York, going 0-3 with a 13.75 ERA in 7 outings. In 1996, he again split the year between Columbus and New York but earned a spot on the Yankees postseason roster. He made two appearances in the ALDS against the Texas Rangers, earning the win in Game 2, and also appeared in two games of the World Series against the Atlanta Braves. In 1997, he appeared in 34 games for the Yankees, going 3-2 with a 2.63 ERA, despite missing a portion of the season with an elbow injury.

Boehringer was selected by the Tampa Bay Devil Rays in the 1997 expansion draft, but the Devil Rays immediately turned around and dealt him to the San Diego Padres. In his first year with San Diego, he went 5-2 with a 4.36 ERA in 56 games, and again appeared in the World Series, facing his former club, the Yankees. In 1999, he went 6-5 with a 3.24 ERA while splitting time between the Padres rotation and bullpen. He only appeared in 7 games for San Diego in 2000, missing much of the year with shoulder injuries. After three seasons with the Padres, Boehringer became a free agent and returned to the Yankees in 2001. After going 0-1 with a 3.12 ERA in 22 outings for New York, he was traded to the San Francisco Giants in early July. He got into 29 games for the Giants and posted an 0-3 record and a 4.19 ERA. He became a free agent that fall and signed with the Pittsburgh Pirates. Over three seasons in Pittsburgh, he got into 153 games, all in relief. After 2004, Boehringer played several more pro seasons but never made it back to the majors. He pitched in the Yankees, Kansas City Royals, and Detroit Tigers organizations, and also spent time with the Bridgeport Bluefish of the independent Atlantic League.

Following his playing days, Boehringer has worked as a scout for the Arizona Diamondbacks.