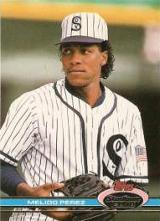 Melido Perez was the brother of Pascual Perez and Carlos Perez and and former minor leaguers Valerio Pérez, Vladimir Pérez, and Dario Pérez.

The most similar player to Melido Perez, according to the similarity scores method, is Len Barker, a pitcher who finished up in 1987 when Melido was a rookie. Both pitchers, while in their prime, could "bring it".

Perez was pitching coach for the DSL White Sox in 2010. He was later the mayor of San Gregorio de Nigua, San Cristobal.