Note: This page is for 1990s major league pitcher Jim Abbott; for the minor league player of the same name, click here 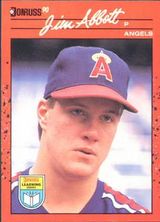 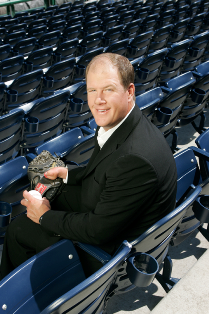 Abbott posing for a Dept. of Labor photo

Despite being born with no right hand, pitcher Jim Abbott went on to a successful big league career, winning 87 games in a decade in the majors.

In high school, Abbott was the starting quarterback on his school's football team. After graduation, he was selected by the Toronto Blue Jays in the draft but instead chose to attend the University of Michigan. During his time there, he won the 1987 Golden Spikes Award and the 1987 Sullivan Award as the nation's top amateur athlete, the only baseball player ever to be so honored. He also led the U.S. in several major international competitions. He carried the flag in the opening ceremonies for the 1987 Pan American Games and then went on to strike out 15 in 13 innings while allowing 6 hits and no earned runs. He won two games for the Americans, who finished second to Cuba. In the 1988 Baseball World Cup, Abbott was named one of the two All-Star pitchers, joining Takehiro Ishii. He was 2-0 with a 1.57 ERA in the tournament and was beating the Cuban national team 3-1 in the finale when a controversial call went against him in the bottom of the 9th to put a runner on. He then allowed a game-tying home run to Lourdes Gourriel Sr. before being replaced by Andy Benes. That summer, Abbott was also a member of the Olympic team. He once again was chosen to carry the U.S. flag in the opening ceremonies, and on the field, he led the squad to a gold medal. He was 1-0 with a 2.25 ERA, 7th-best in the Seoul Games behind James Figueroa, Ben McDonald, Tetsuya Shiozaki, Jesús Feliciano, Parris Mitchell and Ishii.

After finishing his college career, Abbott was signed by the California Angels and scout George Bradley as the eighth overall pick in the 1988 amateur draft. The Angels brought him straight to the majors at the beginning of the 1989 season without any minor league seasoning, and he won 12 games as a rookie (12-12, 3.92), earning a spot on the Topps All-Star Rookie Team. He had his best season two years later, when he was 18-11 with a 2.89 ERA and finished third in voting for the Cy Young Award. After one more season in California, he was traded to the New York Yankees for top prospect J.T. Snow and two other players. Abbott played two seasons with the Yankees, with the highlight being a no-hitter against the Cleveland Indians on September 4, 1993. After a brief stint with the Chicago White Sox, he was traded back to the Angels in 1995. He struggled immensely with the team in 1996, posting a 2-18 record and a 7.48 ERA, and was released the following spring.

After a year away, Abbott was signed by the White Sox again in 1998. He worked his way back up through the minors, winning 6 games in 18 starts. That earned him a September call up, and he won all five of his starts. He signed with the Milwaukee Brewers following the season. In 1999, his only season in the National League, Abbott was able to collect two hits and three RBI in 21 plate appearances (improbably, both hits came against the Chicago Cubs Jon Lieber). He struggled on the mound, going 2-8 with a 6.91 ERA, and was released in July. His prowess with the bat was not really a surprise; he was also an excellent fielder who led the American League with 46 assists in 1991.

Abbott wore number 25 during his big league career, except for his second stint with the Angels, when he wore 52. In 1993, he appeared as himself on an episode of ABC's TGIF sitcom, Boy Meets World.

Since retiring, Abbott has become a motivational speaker. He is a member of the Michigan Sports Hall of Fame and the College Baseball Hall of Fame.