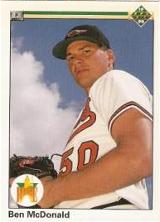 A star pitcher in college, Ben McDonald never quite lived up to expectations in the big leagues. Nonetheless, he won 78 games over nine seasons in the majors. He is the uncle of Mac Sceroler.

Selected by the Atlanta Braves in the 27th round of the 1986 amateur draft, McDonald did not sign and instead decided to attend Louisiana State University. As a freshman, he reached the College World Series, giving up a grand slam to Stanford University's Paul Carey in the championship game. The following year, he pitched in the Baseball World Cup. He did not allow an earned run in the round-robin before struggling in the semifinals against Taiwan. Overall, he was 2-0 with a 1.31 ERA and 11 hits allowed in 20 2/3 innings. He then was a member of the U.S. squad in the Olympics that competed in Seoul, South Korea.

McDonald had a banner season in his junior year in 1989. He began the year with 44 2/3 scoreless innings and finished the season 14-4 with a 3.49 ERA and 202 strikeouts in 152 innings. He was the winner of the Golden Spikes Award, given annually to the best amateur player in the country. However, he again struggled in the College World Series, allowing 11 runs in the game that eliminated LSU from the tournament. Overall during his college career, he struck out 373 batters for Louisiana State, for whom he also played basketball. He was elected to the College Baseball Hall of Fame in 2008.

McDonald was then selected by the Baltimore Orioles with the first overall pick in the 1989 amateur draft and was signed by scout Ray Crone. At the time superlatives about his potential were thrown about lightly; Thomas Boswell called him the "best pitching prospect in history" after the Orioles drafted him and were hesitating to meet his financial demands. He did sign and after just two minor league starts for the Frederick Keys, he made his big league debut on September 6th. Overall, in 6 big league appearances that year, he was 1-0 with an 8.59 ERA. After a stint in the minors to begin 1990, he was back with Baltimore in July. He made his first big league start on July 21st against the Chicago White Sox and threw a four-hit shutout. After winning his first 5 major league starts, he ended the season with an 8-5 record and a 2.43 ERA.

McDonald won 14 games for the Orioles in 1994 but then developed tendinitis, which limited him to just 14 games the next year. He became a free agent after the 1995 season and signed with the Milwaukee Brewers. He notched 12 victories in his first year in Milwaukee in 1996 but was again plagued by injuries the next summer. Traded to the Cleveland Indians following the 1997 campaign, he had unsuccessful surgery on his rotator cuff the next spring. He never pitched again.