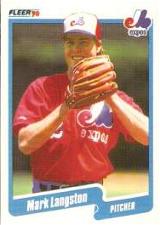 Mark Langston was drafted by the Seattle Mariners in the 2nd round of the 1981 amateur draft. He was drafted on June 8th, and signed on June 17th by scout Bob Harrison. He spent his initial pro season with the Bellingham Mariners, winning 7 and losing 3 for a 3.39 ERA. He did not finish among the top 10 in ERA but fanned 97 in 85 innings and was one of two hurlers chosen for the Northwest League All-Star team, alongside Brian Hunter. In 1982, he was pitching for the Bakersfield Mariners, winning 12 and losing 7 with a 2.54 ERA. He was 5th in the California League in ERA and whiffed 161 in 177 1/3 IP; only Tim Conroy and Curt Young struck out more that year. On the other hand, Langston walked 102 hitters, also finishing third in the Cal League in that department.

In 1983 it was the Chattanooga Lookouts that got the benefits of his service; he won 14 and lost 9 with a 3.59 ERA. His strikeout rate fell a bit (142 K in 198 IP) but his control also improved a bit - he walked 102 again, but in 21 more innings. He just missed the Southern League top 10 in ERA and he was only 4 strikeouts behind SL leader Mark Gubicza. He was 7 free passes behind leader Colin Ward.

In 1984 the Seattle Mariners felt that Langston was ready for his first shot at the major leagues and indeed he was. He had the first of many great seasons as he went 17-10 in 35 appearances in 225 innings for a 3.40 ERA. He pitched with this kind of authority for most of his career. He whiffed 204 but walked 118. He tied Doyle Alexander, Milt Wilcox and Bud Black for 6th in the 1984 AL in wins despite being on a 74-88 club. He led the league in K/9 innings, over 1 ahead of runner-up Mike Witt. He also paced the circuit in both strikeouts and walks.

Runner-up to teammate Alvin Davis in the 1984 American League Rookie of the Year Award voting, the southpaw became the fourth rookie to lead the league in strikeouts, and he set a Mariners record with 17 wins.

A slight elbow injury hampered him in 1985 and kept him below 200 strikeouts for the only time in the 1980s. But he came back to lead the AL in strikeouts in 1986 and 1987. In 1987 Langston set a new Mariner record with 19 wins and became the first Mariner to win a Gold Glove. He set team season records for innings, complete games, strikeouts, and shutouts. On May 10, 1988 Langston broke his own team record by striking out 16 batters in agame against the Toronto Blue Jays.

Halfway through 1989, the Mariners traded Langston to the Montreal Expos in one of the more famous trades of the decade. Langston pitched the rest of the season with the Expos, posting impressive numbers (including a 2.39 ERA), but left in the off-season to sign with the California Angels.

In return for their one-time ace and pitcher Mike Campbell, the Mariners got pitching star-to-be Randy Johnson, a tall, lanky hurler who was having control problems and two other young pitchers, Gene Harris and Brian Holman. Johnson, of course, went on to fame and fortune with the Mariners, ironically shattering a number of Langston's club records, including season wins, strikeouts and shutouts.

Langston was an aggressive and durable workhorse on the mound, an excellent fielder as well as an inning-eater, but towards the latter half of his career became plagued with injuries. In Langston's early years with the Mariners and the Angels, the lefty overpowered his opponents with blazing fastballs, but as time wore him down, he adjusted his pitching style to utilize craftiness instead of speed.

On April 11, 1990, Langston threw the first seven innings of a combined no-hitter against his former team, the Seattle Mariners. Mike Witt threw the last two innings. But Langston began to feel the effects of age just a week into the 1994 campaign. Having thrown 256 innings the year before, he began to feel pain in his elbow for just the second time in his career. After just one start, Langston underwent surgery for bone chips in his elbow.

Though his 15-7 record seemingly indicates that he successfully bounced back in 1995, his 4.63 ERA told a different story. In 1996, Langston fell subject to injuries again, this time having surgery to repair torn knee cartilage. In 1996 and 1997 he spent some rehab time with the Lake Elsinore Storm. He pitched 18 innings and had an 0-2 record.

Near the end of his career, Langston signed with the San Diego Padres for 1998, on board just in time to make it to postseason for the first time in his career. He had a 13.50 ERA in four postseason games. Though re-signed by the team, he was released on March 31, 1999.

Mark inked a minor-league deal with the Cleveland Indians. With the team in need of middle relief, Langston was quickly called on to help out from the pen, but went on the disabled list with elbow problems just as rapidly, and finished the year with 25 appearances and a 5.25 ERA. Mark finished up the 1999 season with the Buffalo Bisons where he appeared in 4 games and had an 0-1 record.

The next spring looked bleak, and after getting off to a slow start, Langston decided to call it quits in March 2000.

After retiring he became a radio analyst for the Los Angeles Angels.