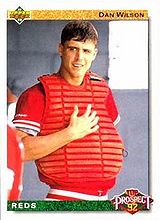 Catcher Dan Wilson announced on September 12, 2005 that he would retire from major league baseball after the season. Wilson made a ceremonial appearance on September 30th, when he caught one inning before retiring.

Wilson played in the 1981 Little League World Series. He hit .318/~.440/.318 as the catcher for Team USA in the 1987 World Junior Championships. He was 0-1 as a pitcher for the Silver Medalists, allowing one unearned run in one inning of work, walking two and allowing no hits. He was with Team USA for the 1989 Intercontinental Cup when they were only 1-5.

He attended Barrington High School in Illinois. He was an All-State in basketball and hockey, and he lettered in football.

He was hired by FSN Northwest as an in-studio analyst for the Seattle Mariners in 2010. During that season, he would drop by the broadcast booth during Sunday home games for a couple of innings. On January 19, 2011, the Mariners announced that Wilson would do play-by-play on radio alongside Rick Rizzs on a rotating basis along with several other former M's announcers, filling the spot vacated by the late Dave Niehaus. On July 29, 2012, he was inducted in the Mariners' Hall of fame alongside his former teammate Randy Johnson.