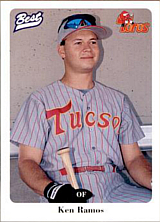 In May and June 1997, Ken Ramos was a 30-year-old rookie outfielder mostly sitting on the Houston Astros' bench. He debuted against the Philadelphia Phillies on May 16th and went hitless in two at-bats, then snuck into a handful more games but followed that same trend, going hitless. In total, he had 12 official at-bats and didn't collect a single knock, but he was not completely worthless. He drew a couple of walks and victimized pitcher Roger Bailey for an RBI.

His unimpressive big league stint belied his excellent minor league career. Blessed with good speed and a great eye at the plate, he hit .342 with 20 steals and a .419 on-base percentage in just his second professional season, 1990. He was in the Cleveland Indians system then, having been signed as an amateur free agent in 1989. A couple of years later, in 1992, he hit .339 with a .442 on-base mark, stealing 14 bases, scoring 93 runs and drawing 82 walks to only 37 strikeouts. In 1993, his first year at Triple A, he had 11 triples and again walked more than he struck out. In fact, his whiffs exceeded his bases on balls only once, in his final season.

Traded to the Chicago White Sox on March 30, 1994, Ramos was quickly claimed off waivers by Houston in early April. He toiled with their Triple A club for two seasons, posting averages of .300 or better and on-base percentages greater than .400 both campaigns. In 1994, he stole a career-high 22 bases; in 1995, he showed surprising pop, posting a career-best .465 slugging mark. Despite down years in 1996 and 1997, Ramos finally earned his long-awaited call to the majors in May of the latter campaign. He returned to Triple A for 1998, played briefly in the Minnesota Twins system, and called it quits.

Less than two decades after his playing days concluded, he faced an inglorious end to a life filled with such triumph and victory — even if it was merely on the minor league scale. Ramos murdered his wife before turning the gun on himself in his Pueblo, Colorado home. The one-time 30-year-old rookie was just 48.