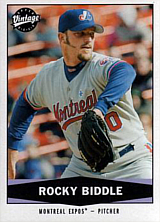 Rocky Biddle was selected by the Chicago White Sox in the supplemental first round of the 1997 amateur draft. He spent five seasons in the major leagues, three with the White Sox and two with the Montreal Expos. Biddle ranks among the top pitchers in many career statistics at Long Beach State University, including strikeouts (361) and innings pitched (312 1/3).

Biddle's first two seasons in the White Sox organization were turbulent, his record was 5-6 and he owned a 4.50 ERA between the Class A Hickory Crawdads, the rookie level AZL White Sox, and the High A Winston-Salem Warthogs. His development was further slowed by Tommy John surgery that forced him to sit out the 1999 season. Biddle bounced back strong in 2000, winning 11 games with a 3.08 ERA for the Double A Birmingham Barons. The 24-year-old even got his first taste of the big leagues that season, making four starts for the White Sox. The White Sox starting rotation was decimated by injuries in 2001, and Biddle became a valuable member of the club. He appeared in 30 games with a 7-8 record and a 5.39 ERA, but shoulder inflammation forced him to cut his season a month short. He moved to the bullpen in 2002, where he posted a 4.06 ERA in 44 games. He continued to pitch out of the bullpen after the White Sox traded him to Montreal as part of a deal for Bartolo Colon after the season. In fact, he was installed as the Expos' closer at the beginning of the 2003 season and kept the job into 2004, when he was replaced by rookie Chad Cordero. He moved to the starting rotation at that point. Overall, Biddle was 9-16, with a 5.85 ERA and 45 saves in his two seasons with the Expos. He was released in November 2004 and would not return to the bigs.