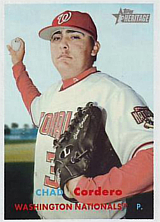 The National League Rolaids Relief Man in 2005 was Chad Cordero, the Washington Nationals' flatbrimmed closer who saved a league-leading 47 games with a 1.82 ERA. Just five seasons later, he would throw his last big league pitch, through at 28.

Chad pitched five scoreless innings in the 2002 World University Championship, getting one save. After starring as a reliever for Cal State-Fullerton, leading them to the 2003 College World Series, he was a surprise first round pick by the Montreal Expos in the 2003 amateur draft. The Expos had been known for drafting mainly high school players with their top picks with little success in recent years. They went a completely different route that year as they saw in Cordero a pitcher who already had major league stuff, and after only a few weeks in the Florida State League, he was called up to the bigs on August 30, 2003, debuting the same day. The Expos were fighting the Florida Marlins for the National League Wild Card, and the early call-up made Cordero eligible for the postseason. Surprisingly, he was not the first player from the 2003 draft class to reach the majors, as fellow first-rounder Ryan Wagner, also a reliever, had beat him to the punch by a few days with the Cincinnati Reds. Cordero pitched well in his first taste of the major leagues despite his limited experience, earning his first win and save towards the end of the season and putting up a 1.64 ERA in 12 games, although the Marlins surged well ahead of the Expos, on their way to an upset World Championship.

Cordero earned a spot in the Expos' bullpen in 2004 and never looked back. He first became the set-up man for improbable closer Rocky Biddle. When Biddle, in his final big league season, had struggled badly by mid-year, Chad took over at closer. He went 7-3 with 14 saves and a 2.94 ERA in 69 games, throwing the final pitch by an Expos pitcher at Olympic Stadium on September 29th. The Expos begat the Nationals after the season and Cordero had his best season in the team's inaugural year in 2005. In June, he tied the big league record for saves in a month with 15 and converted a 24th consecutive save, passing Mel Rojas for the franchise's all-time streak. He led the National League with 47 saves, had an outstanding 1.82 ERA and won the NL Rolaids Relief Award while being named to the All-Star team. Additionally, he was named Washington Nationals Player of the Year, [obviously] the first man to be so honored.

Nothing went right for Chad after that. After six April appearances in 2008, he tore his labrum and underwent surgery, missing the rest of the year. He was non-tendered at season's end and caught on with the Seattle Mariners, returning to the big leagues in 2010 for a rough 0-1, 6.52 line in 9 games. He was designated for assignment in July and spent the rest of the season in the New York Mets system. After failing to make the Toronto Blue Jays in spring training 2011, he caught on with the independent St. Paul Saints in 2011, retiring during the season. In 2013, he felt the itch to play again after hitting 92 mph with his fastball during the annual Cal-State Fullerton alumni game. The Los Angeles Angels of Anaheim gave him a look, and he made 58 appearances at two levels in the minors with a 5.53 ERA to close his career.