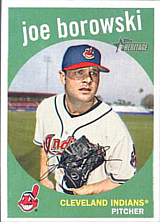 Fifteen minutes of (baseball) fame for Joe Borowski came in 2007. He had toiled in journeyman anonymity, pitching for six teams between 1995 and 2006, when he exploded with an American League leading 45 saves for the AL Central champion Cleveland Indians in 2007. However, the 5.07 ERA he posted alongside those saves remains a record for highest by a pitcher to save 40+ games. He was released the next July after even more disastrous mound results and injuries, never to return to the bigs.