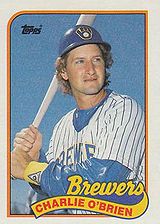 Catcher Charlie O'Brien is credited with inventing the "Hockey Style" mask which became very popular in the 1990s and early 2000s.

Charlie played for eight different major league franchises. He earned his living as a back-up catcher renowned for his defensive prowess, a reputation which was sealed when he spent a number of years as Greg Maddux's personal catcher with the Atlanta Braves in the early 1990s. He was never much of a hitter in the major leagues - his personal bests were the 13 homers and 44 RBIs he hit with the Toronto Blue Jays in 1996 - it was not always that way. In college, he set school slugging records for Wichita State University, hitting 25 home runs and driving in 116 runs as the Shockers reached the finals of the 1982 College World Series.

O'Brien hit the second and last triple of his major league career in 1997, leading to the following quote from teammate Dan Plesac: "Let's put it this way. The last time Charlie hit a triple, they were still showing games in black and white."[1]

He is the brother of minor league first baseman John O'Brien and brother-in-law of minor league pitcher Erik Sonberg. His son Chris O'Brien turned pro in 2011. John's son, Austin, is a senior infielder at University of Oklahoma in 2017.