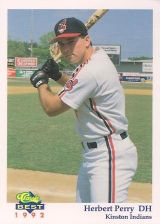 Herbert Perry overcame six knee operations to have a nine-year career in the majors, primarily as a third baseman.

Perry, born in Florida in 1969, played college ball at the University of Florida, where he was a pitcher and also a quarterback.

In college, he attracted the attention of the Cleveland Indians, who drafted him in the 2nd round in the 1991 amateur draft. In the minors, he was to suffer shoulder and wrist injuries, which slowed down his progress.

He was to have multiple knee operations, and missed all of 1997. He was then selected by the Tampa Bay Devil Rays in the expansion draft following that season. 1998 was spent in the minors, where Perry played in only 15 games at three different stops.

The year 2000 was Perry's first year in the majors without spending part of the season in the minors. He started slowly with Tampa Bay, hitting only .214 in 7 games with them, and was put on waivers. Luckily for him, the Chicago White Sox were interested, and he spent the rest of the season with them. The 2000 White Sox were a division winner, with Frank Thomas the top hitter. Young up-and-coming players included Paul Konerko, Carlos Lee and Magglio Ordonez. Perry was to beat out Greg Norton for the third base job, after Norton had an injury. Perry hit .308 with 12 home runs in 109 games. Defensively, his range was excellent.

His nickname on the White Sox was "The Milkman."