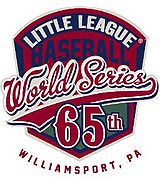 The 2011 Little League World Series was won by Huntington Beach, CA, which brought the title back to the USA by defeating the Japanese entry; Japan had won in 2010.

A team from Uganda initially became the first African team to qualify for a Little League World Series, but was found to have ineligible players. The Africa/Middle East slot then went once again to a team from Dhahran, Saudi Arabia, composed of American children of oil industry employees.