A season after winning their first NL East title in 14 years, the 2008 Philadelphia Phillies won the franchise's second World Series title. In the process, they ended the city of Philadelphia's 25 year major sports championship drought, which started in 1983 after the 76ers won the NBA championship.

Though the Phillies surprised everyone around baseball by overcoming a 7-game deficit against the New York Mets with 17 left to play to win the NL East, their quick exit in the 2007 Postseason left a bad taste in their mouths. The team started the offseason by retaining manager Charlie Manuel. Determined to build on the NL East title, the Phillies acquired Brad Lidge and Eric Bruntlett from the Houston Astros for outfielder Michael Bourn, reliever Geoff Geary and third base prospect Michael Costanzo. This deal would provide unprecedented dividends during the season for the Phillies and be remembered as one of GM Pat Gillick's better, if not best, deals. Acquiring Brad Lidge as a closer allowed manager Charlie Manuel to move Brett Myers back into the rotation. Myers, who ended the previous season as the club's closer, was in turn given the role of the team ace. This solidified the rotation of Brett Myers, Cole Hamels, Jamie Moyer, Kyle Kendrick, and Adam Eaton. Just before Christmas, Pat Gillick continued to add pieces to the puzzle, signing middle reliever Chad Durbin and right fielder Geoff Jenkins. Third basemen Pedro Feliz was also brought in two weeks before Spring Training began, with the hope that he would shore up the spot defensively along with adding some pop to the already heavy-hitting lineup. All five pieces added by Gillick, who announced after the 2007 season that the 2008 season would be his last in Philadelphia, would prove pivotal to the Phillies success.

Before the season, the Phillies were expected to be in another dogfight for the NL East with the New York Mets. Surprisingly when the season began, the Phillies and Mets swapped their traditional roles. The Phillies, after losing 4 of their first 6 (including 2 of 3 to begin the season at home to the Washington Nationals), finished April with a respectable 15-13 record. The Phillies had another strong month in May, going 17-12 to run their record to 32-25. By June 13, their record swelled to 41-28 after an impressive 20-2 win at the St. Louis Cardinals. This gave the Phillies a 4-game lead on the surprising Florida Marlins, whom they took first place from on June 1. The Marlins weren't expected to contend after trading All-Star third basemen Miguel Cabrera and starting pitcher Dontrelle Willis in the off-season. While Ryan Howard slumped, Pat Burrell and Chase Utley were instrumental in the Phillies early success. Burrell hit .330 in April, with an impressive 8 HRs and 25 RBI. Utley showed exceptional power in the early going, belting 21 HR by June 3. Utley had an incredible stretch where between May 25 and June 2, he homered in seven of the eight games. Meanwhile, the Mets, usual strong starters, were faltering up in New York. On June 16, while in third place, behind the Marlins and 6.5 back from the first-place Phillies, the Mets fired manager Willie Randolph and promoted former Chicago White Sox manager Jerry Manuel to the helm. This would awaken the Mets, who responded by going on an 18-9 run to pull even with the Phillies on July 17. The Phillies, meanwhile, cooled considerably, finishing the first half with a 11-16 run, which narrowed their lead in the NL East to one game entering the All-Star break. A big reason for their narrow lead at the All-Star break was the struggles of Brett Myers. Myers, who was the expected ace faltered, prompting the Phillies to send him to the minors to work on his mechanics and get his confidence back. The club also called up rookie J.A. Happ. In Happ's 2 spot starts, he earned a no-decision in both, keeping the Phillies in the game both games. To add to their troubles, Adam Eaton began to struggle again. Eaton was pulled from the rotation for the good after his July 12 start and later sent down to the minors. Despite the 2/5s of the rotation struggling, a strong bullpen anchored by Brad Lidge and a good offensive attack kept the Phillies afloat through July. Pat Gillick then added another piece to the puzzle in an effort to strengthen the rotation, trading for Oakland A's starter Joe Blanton. The Phillies were largely criticized for not acquiring C.C. Sabathia or Rich Harden, and seen by the local media as taking the cheap route in acquiring Blanton. Blanton, however, would respond by going 4-0 with a 4.20 ERA in his 13 starts in Philadelphia, helping to propel the Phillies down the stretch.

While the Phillies tried to address their pitching needs for down the stretch, the battle with the Mets ensued. The Mets displaced the Phillies for the first place in the NL East on August 14, when the Phils were in amidst of being swept by the Dodgers in Los Angeles. The offense sputtered for most of August, wasting efforts from many of the starters, included rejuvenated Brett Myers. Myers, who returned from the minors on July 23, finally pitched well as a starter, going a noteworthy 7-4 with a 3.06 ERA in his final 13 starts. The Mets then held first place for a month, only conceding the top spot to the Phillies for one day, August 26. The Marlins, meanwhile, finally faded in mid-August, making the race exclusively between Philadelphia and New York. Gillick further strengthened the depth that was on the team in August, adding left-handed reliever Scott Eyre to the bullpen and left-handed bat Matt Stairs to the bench. However, the Phillies could not take first place from the Mets for most of September, and fell to 3.5 games back after a disappointing 7-3 home loss to the Florida Marlins on September 10. However, Ryan Howard caught fire in September and helped the Phillies to respond to the deficit with a 13-3 sprint to the finish line. This strong surge allowed the Phillies to pass the Mets for good. It was the Mets who once again collapsed in September, stumbling to the finish line by losing 10 of their final 17 games. Brad Lidge, who remained perfect in save situations throughout the season, closed out another NL East title. Akin to the 2007 Phillies season, the NL East was won on the final weekend against the Washington Nationals. Jimmy Rollins, the 2007 MVP who drew the ire from Phillies fans when calling them "front-runners" during a sports TV talk show appearance, flashed his brilliant glove work by making a diving stop of a ground ball by the Nationals' Ryan Zimmerman and starting a game-ending, division-winning double play. At that point the Nationals were threatening the Phillies' lead by loading the bases with one out in the 9th inning, already scoring one run off of Lidge to cut the deficit to 4-3. Rollins, who had a disappointing year at the plate, helped Lidge to keep his perfect season intact while lifting the Phillies to their second straight NL East title.

The Phillies would make history in the 2008 Postseason by using their strong 13-3 finish in the regular season as the springboard. Surprisingly, pitching is what led the Phillies to a 92-70 regular season mark. The team finished with a 3.89 ERA, almost a full point lower from the season before. Cole Hamels was terrific again, winning 14 games and finishing with a 3.09 ERA. Jamie Moyer had a bounce back season, winning a team-high 16 games and possessing a 3.71 ERA. Brett Myers was terrific down the stretch, and Joe Blanton proved to be a real find. Kyle Kendrick faltered down the stretch, prompting the team to once again call on J.A. Happ. The bullpen proved to be lights out, never conceding a 9th inning lead all season long. Brad Lidge was instrumental to holding these 9th inning leads, saving all 41 opportunities the club gave him. Late in the season, Ryan Madson came into his own, taking the 8th inning setup role from Chad Durbin. Durbin, who was terrific until the final two months, wore down the stretch due to a career-high in relief appearances. J.C. Romero and Scott Eyre gave the team two great left-handers out of the bullpen, with Romero continuing to be unhittable to left-handers. 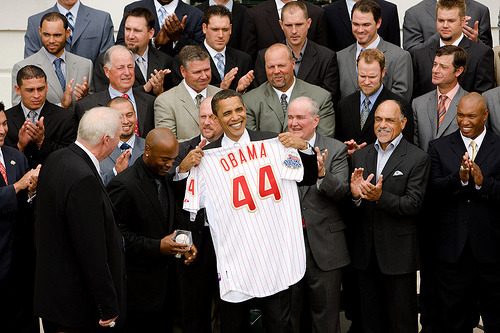 The World Series Champs visit the White House in 2009

On the offensive side, Ryan Howard finished with a league-leading 48 HRs and 146 RBI, even though not being elected to the All-Star game due to his slow start. Chase Utley slowed down considerably in the second half, clubbing just 12 home runs after June 2 due to a hip injury that would require offseason surgery. Jayson Werth and Shane Victorino bolstered the outfield by greatly improving as players. It was Werth who became the everyday player, which sent free agent acquisition Geoff Jenkins to the bench. Originally the two were expected to platoon, but Werth showed his raw power by belting 24 HRs and becoming an everyday player as a result. Victorino, meanwhile, made Phillies fans forget about the absence of Aaron Rowand, who departed in the offseason to San Fransisco. While Jimmy Rollins, Pedro Feliz, and Carlos Ruiz left a lot to be desired with their offensive outputs, their defense steadied the Phillies throughout the season. Pat Burrell, in what became his final season in Philadelphia, clubbed 33 HRs and 86 RBI. Greg Dobbs and Chris Coste were instrumental off the bench. Dobbs broke the Phillies mark for pinch hits in a season and had 18 pinch-hit RBI, the most in baseball. The Phillies, who did not make the headline-grabbing offseason move like the Mets (who traded for pitcher Johan Santana, then signed him to the biggest contract ever for a pitcher), showed the baseball world that it takes a true team effort to win the World Series. Strong pitching, good defense, and a great offense helped lift the 2008 Philadelphia Phillies into the baseball lore of World Series winners, enshrining themselves in the hearts of Philadelphia fans forever in the process.

(1) Game suspended after 5½ innings and resumed on October 29