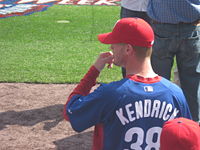 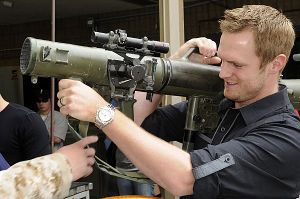 Kendrick tours a naval facility in 2011.

Kyle Kendrick was drafted by the Philadelphia Phillies in the 7th round of the 2003 amateur draft. He was signed by scout Tim Kissner and made his pro debut that summer.

Kendrick threw his first major league shutout on May 26, 2012 against the St. Louis Cardinals; it was only the second complete game of his career.

On February 4, 2015, he signed a one-year deal with the Colorado Rockies for $5.5 million. In a show of confidence, he was picked to be the team's opening day starter on April 6th. However, things did not go very well for Kyle with his new team, as he finished the year with a record of 7-13 and a bloated ERA of 6.32 in 27 starts. Even though he only pitched 142 1/3 innings, he led all National League pitchers by allowing 100 earned runs. He became a free agent after the season and was signed by the Atlanta Braves, but nothing went right for him in spring training in 2016, as he gave up 10 runs on 14 hits in 3 2/3 innings to be cut on March 12th. He was then signed by the Los Angeles Angels of Anaheim and spent the season in their minor league system, going 6-5, 4.72 in 16 games for the Salt Lake Bees, in addition to 4 rehabilitation outings with the AZL Angels.

Kendrick moved to the Boston Red Sox organization in 2017 and began the year in AAA with the Pawtucket Red Sox. He did not start off particularly well, going 1-3, 6.00 in his first 4 starts, but on May 4th, he was called up to Boston to start in place of Steven Wright, who had just landed on the disabled list. Facing the Baltimore Orioles at Fenway Park, he was hit hard, giving up 6 runs on 8 hits in 4 innings and was charged with his team's 8-3 loss.