Note: This page is for pitcher Steven Wright who made his major league debut in 2013. For others with the same name, click here 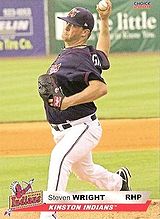 Pitcher Steven Wright made it to the majors when he was 28 years old, two years after becoming a knuckleball pitcher.

Wright was twice All-State in high school. The San Diego Padres picked him in the 26th round of the 2003 amateur draft. He had a 2-1, 4.86 record as a college freshman, then improved to 5-3 with four saves and a 3.26 ERA as a sophomore. He was superb as a junior at 11-2, 2.30 with 123 K in 109 2/3 IP and one save. He was third in the Western Athletic Conference in wins and first in both strikeouts and ERA (.75 better than anyone else). He was 32nd in NCAA Division I in ERA (just ahead of Jake Arrieta) and tied for 14th in strikeouts (with Brooks Brown). Baseball America named him second-team All-American, joining Arrieta, Jonah Nickerson, Nick Schmidt and Don Czyz as the pitchers.

Wright started 2012 strong for Akron (9-6, 2.49) then was sent to the Boston Red Sox in a trade for Lars Anderson. He was 1-0 with a 1.50 ERA in one game for the Portland Sea Dogs then moved up to the Pawtucket Red Sox (0-1, 3.15 in 4 G). He allowed two runs in 7 innings to win his only playoff outing for Pawtucket. He led all AA qualifiers in opponent average (.208) and was second in ERA and led all Indians farmhands in ERA (counting his Akron time only). He was second in the Eastern League in ERA, .20 behind Chris Heston and tied for 8th in wins. He had a 2.48 ERA in five Dominican Winter League appearances for the Leones del Escogido.

He was 1-0 with a 2.70 ERA to open 2013 for Pawtucket then was called up when Joel Hanrahan went on the DL. He made his major league debut with the Red Sox on April 23rd­. Relieving Alfredo Aceves with a 8-0 deficit in the 4th, he finished up a rain-shortened 13-0 loss to the Oakland Athletics. He got a double play grounder from Brandon Moss, the first batter he faced in The Show, but gave up 6 hits, 4 walks and 5 runs in the remaining 3 innings, a two-run double to Coco Crisp being the biggest blow. After the game, he was sent back down as Daniel Bard was coming back up from an injury. He made another one-off appearance on July 11th, which went much better. Ryan Dempster had been roughed up by the Seattle Mariners for 7 runs in 3 1/3 innings before Wright took over, but he was outstanding, giving up no runs over 5 2/3 innings, thus allowing the Red Sox to mount a comeback and tie the game. The Sox scored a run in the top of the 10th to take an 8-7 lead and Koji Uehara then got the save as Wright was credited with his first big league win. After another stint in Pawtucket, he got his second win in his next big league appearance on August 1st, in eerily similar circumstances. Once again Dempster had given the Mariners 7 runs, this time at home and in 6 innings. Steven kept them off the scoreboard for the last three frames, then in the bottom the 9th, Boston mounted a miraculous comeback, scoring 6 runs against three relievers for another stirring 8-7 win. He was given the ball for his first career start on August 6th, facing the Houston Astros, but catcher Ryan Lavarnway had a terrible time handling his knuckler, tying a record by allowing four passed balls in the 1st inning. Wright's pitches were jumping all over the place as he allowed two walks, hit a batter and threw a wild pitch, leading to three runs. He was replaced by Brandon Workman in the top of the 2nd and the Sox went on to win the wild game, 15-10. Overall that season, he went 8-7, 3.46 in 24 starts for Pawtucket, with 3 shutouts, and 2-0, 5.40 in his four games for Boston.

Wright spent most of 2014 in the minor leagues. He won his only start for AA Portland and went 5-5, 3.41 in 15 starts for Pawtucket. He made a one-off appearance for the Red Sox on August 17th, giving up one run in four innings of relief against the Houston Astros in an 8-1 loss. He was called back to Boston when rosters expanded in September to be used in long relief and did very well in his first two appearances, with 5 scoreless innings against the Toronto Blue Jays on September 7th, and three innings without a run against the Kansas City Royals on the 13th. Overall he went 0-1, 2.57 in 21 innings of work. The performance proved intriguing to Red Sox management, who looked for him as potential swingman in 2015, given his ability - rare in today's game - to start or pitch multiple innings at short notice. With the Red Sox putting together a brand new starting rotation, including some pitchers with a history of injuries, having him around was an important safety valve. The question was whether he would be doing this based in the Red Sox bullpen, or from AAA Pawtucket. He did make the Red Sox's staff as a long reliever, and this proved a blessing on April 10th, when a close game between the Sox and their arch-rivals, the New York Yankees, began to stretch into the late hours of the night. Wright was sent to the mound in the 15th inning as his team's 9th pitcher of the night; the Sox twice took a one-run lead, in the 16th and 18th, but both times the Yankees came back with a run of their own. Finally, after Mookie Betts drove in Xander Bogaerts with a sacrifice fly in the top of the 19th, Wright was able to shut down the Yankees in his 5th inning of work to get credit for the 6-5 win. The game ended at 2:13 AM and was the longest ever played at New Yankee Stadium. He pitched 16 times for the Red Sox that season, including 9 starts, going 5-4, 4.09 in 72 2/3 innings. In Pawtucket, he went 2-5, 3.81 in 8 starts.

In 2016, Wright finally managed to secure a full-time job as a starter for the Sox coming out of spring training and pitched well in the early going. On May 8th, he pitched a three-hitter to defeat the Yankees, 5-1. He came within one out of a shutout, but Brett Gardner hit a solo homer to deny him; however, he still managed to throw his first career complete game and lowered his ERA to 1.52, second-best in the American League at that point. His excellent first half was rewarded with a first nomination to the All-Star team. On August 5th, he pitched a complete game three-hit shutout in defeating the Los Angeles Dodgers, 9-0. He then missed two weeks of action, and his season ended due to injury after a couple more starts at the end of August. He finished the year at 13-6, 3.33 in 24 starts and was unavailable as the Sox were eliminated by the Indians in the Division Series. He then started the 2017 campaign slowly, going 1-3, 8.25 in his first 5 starts before being but on the disabled list on May 4th with torn cartilage in his left knee. The injury requires surgery, wiping out the remainder of his season.

On December 10, 2017, the media reported that Wright had been arrested on charges of domestic violence following an incident at his home located outside Nashville, TN, following an argument with his wife. He was released on bail and was scheduled to appear in court later that month. The case was retired a couple of weeks later, and was to be dismissed entirely after a year if there were no further allegations against him in that time. However, he remained under investigation by Major League Baseball, as it was an established precedent that a player could be disciplined even in the absence of any finding of guilt by a court of law. When he arrived in spring training in February 2018, Wright denied having ever hit his wife but said he was prevented from discussing the case further because of the ongoing investigation. He was handed a 15-game suspension for the incident, which he served before being reactivated by the Red Sox on May 14th. He was now headed for a bullpen role. He went 3-1, 2.68 and recorded his first career save in 20 games, including 4 starts, pitching 53 2/3 innings and providing some excellent long relief for the Red Sox. However, he missed time between June and September because of a knee injury and while he was initially on the team's postseason roster and expected to play an important role, he was placed on the disabled list after Game 1 of the Division Series as his knee issues flared up again during a workout. He was not reactivated after that, thus missing the Sox's run to a World Series title. After the season, he underwent arthroscopic surgery on his knee to remove damaged tissue.

Wright hit another career roadblock in spring training on March 6, 2019 when he was handed a suspension of 80 games for violating Major League Baseball's drug policy. He had tested positive for Growth Hormone Releasing Peptide 2 (GHRP-2), which is classified as a performance-enhancing substance. He claimed, like many others before him, that he had never willingly ingested a PED. He made his return to the mound on June 26th, then on June 29th, he was the losing pitcher in the first major league game to be played in Europe. He was actually one of the more effective pitchers for the Red Sox that day, when they lost 17-13 to the New York Yankees in the too-cozy confines of London Olympic Stadium: he allowed 2 runs in 2 innings, but they came at the wrong time and he was saddled with the loss. He also pitched in the second game of the series and did not give up a run in his only inning in another high-scoring game, this one a 12-8 loss. On July 14th, he was placed on the injured list with a bruised right foot, the result of having been hit by a line drive off the bat of Max Muncy of the Los Angeles Dodgers the day before. While rehabbing from his toe injury, Wright injured his right elbow and on October 19th, one day after the Red Sox released him, it was announced that Wright would undergo Tommy John surgery and miss the 2020 season.

Halfway through spring training in 2021, he signed a free agent contract with the Pittsburgh Pirates.