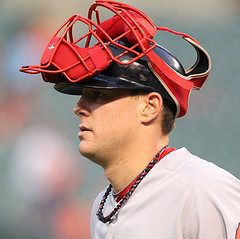 Catcher Ryan Lavarnway was a 6th-round draft choice by the Boston Red Sox in the 2008 amateur draft out of Yale University. He was signed by scout Ray Fagnant for a reported $325,000 and made his professional debut with the Lowell Spinners that year, hitting .211 in 22 games, then began to show serious power potential the next season when he hit 21 homers for the Greenville Drive while hitting .285 with 87 RBI. In 2010, he split his time between the Class-A Salem Red Sox and AA Portland Sea Dogs, hitting a combined .288 with 22 homers and 102 RBI. He was a Carolina League All-Star that year.

In 2011, Lavarnway began the year back at Portland where he continued to hit well, hitting 14 homers in 55 games. Promoted to the AAA Pawtucket Red Sox, he kept up his pace, with another 16 homers in his first 55 games. He was batting a combined .293 with 30 homers and 96 RBI in 110 games when the Red Sox called him up to the Show on August 18th, when they placed 3B Kevin Youkilis on the disabled list. With DH David Ortiz also unavailable for a few days due to a heel injury, Lavarnway was inserted in the starting line-up that day, DHing and batting 7th. He went 0 for 4 with a strikeout in his debut, but got his first major league hit the next day. He had a tremendous game in his first start behind the plate, taking over for the injured Jarrod Saltalamacchia and Jason Varitek on September 27th in a crucial game against the Baltimore Orioles with the Sox tied with the Tampa Bay Rays in the wild card race with two games left in the season. He hit his first two major league homers in that game, then made a spectacular defensive play on a squibbler by Matt Wieters as the O's were rallying in the 9th and the Sox won, 8-7, to stay even with Tampa Bay heading into the season's last day. The Red Sox were eliminated the next day though, capping a brutal late-season collapse, and Ryan finished with a .231 average and those two homers in 17 games.

Lavarnway was an International League mid-season All-Star in 2012, then was recalled to Boston in early August when Kelly Shoppach was sent to the New York Mets. He was hitting .295 with 22 doubles and 8 homers in 83 games at Pawtucket and had been voted the best defensive catcher in the International League. On August 18th, he teamed with Craig Breslow to form the first all-Yale University battery in the major leagues since 1883 (Al Hubbard and Jack Jones). He hit only .157/.211/.248 in 46 games for Boston. As a result of his lack of hitting, he started the 2013 season back in the minors. He came back for a three-game stint in May, and then for his first extended stay in the big leagues starting on June 20th, as the third catcher behind Jarrod Saltalamacchia and David Ross. On August 6th, he got the start behind the plate as knuckleballer Steven Wright made his first big league start; Ryan had done well catching the difficult pitch on previous occasions, but this time, it was wilder than a swarm of drunken bees. He allowed four passed balls in the 1st inning, tying a record set by Ray Katt and Geno Petralli, who had both been vainly trying to corral knuckleballs as well, in addition to seeing Wright throw a wild pitch, issue a pair of walks and hit a batter. Manager John Farrell decided to take out Wright after the painful inning, in which the Houston Astros had scored three runs, and replace him with Brandon Workman. Lavarnway got a chance to redeem himself later in the game by hitting a two-run double in the 5th inning that put Boston ahead to stay in what turned out to be a wild 15-10 win.