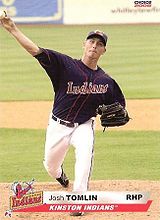 Pitcher Josh Tomlin was drafted by the Cleveland Indians in the 18th round of the 2006 amateur draft. He was signed by scout Mike Daly and made his pro debut that summer.

Tomlin had a storybook major league debut for the Indians on July 27, 2010. With a huge media presence in attendance hoping to see the New York Yankees' Alex Rodriguez hit his 600th major league home run, Tomlin stole the spotlight, outpitching CC Sabathia and holding A-Rod hitless over 7 innings of work during which he allowed only 1 run on 3 hits. He was credited with the Indians' 4-1 win for his first major league victory.

Tomlin was the 5th major leaguer since 1919 to pitch 5+ innings in his first 21 games in the majors; the prior hurler to do so was Daisuke Matsuzaka (28 games).

Tomlin made only one major league appearance in 2013, pitching 2 scoreless innings. He had undergone Tommy John surgery in August of 2012 and was not back pitching until the end of 2013, his sole appearance coming on September 12th. He then started 2014 back in the minors to continue his rehabilitation and came back as a major league starting pitcher on May 6th, when he defeated the Minnesota Twins, 4-2, giving up one run over 6 2/3 innings. On June 28th, he pitched a one-hit shutout in defeating the Seattle Mariners, 5-0, striking out a career-high 11 in the process. It was the first one-hitter by an Indians pitcher since Billy Traber had pitched one in 2003. He finished the year with a record of 6-9, 4.76 in 25 games, including 16 starts, with 104 innings.

He was again injured in 2015 after undergoing shoulder surgery in the off-season. He only made his first appearance for the Indians on August 15th, when he was charged with a 4-1 loss to the Minnesota Twins in spite of giving up only 2 runs in 6 1/3 innings. In his next start, on August 20th, he picked up the win against the New York Yankees, allowing only a solo homer to Alex Rodriguez and a double to Chase Headley in 7 innings of work as Cleveland won, 3-2. His record for the season was an excellent 7-2, 3.02 in 10 starts. He started off 2016 very strong as well, and by the end of July his record stood at 11-3 with an ERA of 3.43. However, he had a truly nightmarish month of August, going 0-5 with a ERA of 11.48.