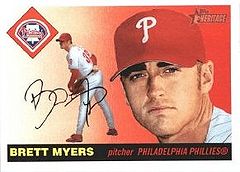 Brett Myers was the top draft pick of the Philadelphia Phillies in 1999, being selected 12th overall out of a high school in his native Jacksonville, FL. He breezed through the Phillies' minor league system in less than four seasons, finding success at each level where he stopped. In his first professional experience in 1999, he went 2-1, 2.33 in 7 games for the GCL Phillies, then followed with an excellent season for the Piedmont Boll Weevils of the South Atlantic League in 2000, where he had a record of 13-7 with a 3.18 ERA and 140 strikeouts in 27 starts. Promoted straight to the AA Reading Phillies in 2001, he had another solid season, finishing 13-4, 3.87 in 26 games, with 130 strikeouts, in spite of being one of the youngest players in the circuit at age 20. He started 2002 with the AAA Scranton/Wilkes-Barre Red Barons, where he was 9-6, 3.59 in 19 starts, with an excellent K/W ratio of 97 to 20. The Phillies felt he was ready for the Show.

Brett made his major league debut with the Phillies on July 24, 2002, pitching brilliantly in a 4-2 win over the Chicago Cubs. He only gave up 2 hits and a walk in 8 innings while striking out 5. He was in the majors to stay. He made 11 more starts that first season, ending the year at 4-5, 4.25. In 2003, he became one of the team's top pitchers, putting up a record of 14-9, 4.43 in 32 starts, working 193 innings and striking out 143 batters. He seemed poised to become one of the best starting pitchers in baseball at that point, and while he would have other good seasons, he failed to make much progress beyond that initial success. As a result, even though he has been a successful major league starter for a decade, and has also pitched relatively well when used as a closer, he has a reputation as a bit of an underachiever, given that he seemed bound for glory at a very young age.

However, Myers' career took a strange twist in 2007. With the team relatively rich in starters but weak in relievers, manager Charlie Manuel decided to make Myers his closer in spite of the fact that Brett had never been used as a reliever previously. However, with veterans Tom Gordon and Antonio Alfonseca both on the last legs of their careers and the team otherwise expected to compete for the division title, Manuel figured his young power pitcher could be a tremendous closer. Even more unusual, the decision was not taken in spring training, but after he had started the season in the rotation as the team's opening day starter. But after going 0-2, 9.39 over his first three starts, he was moved to the bullpen, first as a set-up man, and beginning in early May as the closer. The move sort of worked: Myers did save 21 games even though he missed all of June and most of July to right shoulder strain, but if the Phillies were expecting a new Eric Gagné, it wasn't the case. His record was 5-7 and his ERA a pedestrian 4.33 even though his K/W ratio was an excellent 83/27. The Phillies did win a division title - their first since 1993 -, but were short of reliable starters by the time the postseason rolled around, and Myers only pitched 1 1/3 innings in the NLDS as his teammates could not give him any leads to protect.

After the 2007 season, the Phillies acquired an experienced closer in Brad Lidge and the one-year experiment with Myers was over. He was back in the starting rotation in 2008, but had an off-year. Pitching with a great team behind him, he was only 10-13, 4.55, and was well behind Cole Hamels, Jamie Moyer and Joe Blanton on the depth chart. He did start a game in all three rounds of the post-season, though. In the NLDS, he made a solid start to beat the Milwaukee Brewers in Game 2, going 7 innings in a 5-2 win. He was hit hard in his Game 2 start in the 2008 NLCS, giving up 5 runs in as many innings to the Los Angeles Dodgers, but still won the game, 8-5; not known for his hitting prowess, he helped his own cause by going 3 for 3 with a pair of runs scored that day. He also showed his combative streak by intimidating the Dodgers with pitches thrown at Russell Martin and Manny Ramirez that day. In the 2008 World Series, he was the only Philly to lose to the Tampa Bay Rays, being charged with the 4-2 loss in Game 2. His 2009 season was basically lost however, after he was placed on the disabled list on May 28th because of a hip strain. He underwent surgery and was not reactivated until early September, at which time he was moved to the bullpen with mixed results. He had been the opening day starter again, but finished the year 4-3, 4.84. In the postseason, he only made a pair of relief appearances as the Phillies failed to repeat as World Champions.

Myers became a free agent after the 2009 season and signed a contract with the Houston Astros. He had the best season of his career in 2010, going 14-8 with a 3.14 ERA and 180 strikeouts in spite of pitching for a weak team. Things went sour in 2011 however, as he fell to 7-14, 4.46, not being able to defy the law of gravity for a second consecutive year. His record reflected the Astros' wretched season, but he still managed to top 200 innings and to record 160 strikeouts. However, as spring training opened in 2012, in a move taking him back to 2007, the Astros announced that he would be their closer. The incumbent in the role, Mark Melancon, had been traded in the off-season, and the other experienced pitcher vying for the job, Brandon Lyon, was coming off major arm surgery. Still, it was a strange move given Myers' history of pitching quite well as a starter, and of being a workhorse on a staff where few pitchers could be counted on to go deep into games. He went 0-4 with 19 saves in 35 games that season, but on July 21st, one day after the Astros' acquisition of closer Francisco Cordero from the Toronto Blue Jays, he was traded to the Chicago White Sox in return for two minor leaguers, Matt Heidenreich and Blair Walters. He pitched another 35 times for Chicago, going 3-4 with a 3.12 ERA but no saves, ending the year with a combined record of 3-8, 3.31 and 19 saves in 70 appearances. He pitched 65 12/3, giving up 65 hits and 15 walks, and striking out 41.

On January 1, 2013, Myers signed a one-year contract with the Cleveland Indians, who stated that they planned to use him as a starter once again. He was roughed up in his debut with the Indians on April 4th, matching a personal worst by giving up four homers to the Toronto Blue Jays in being charged with a 10-8 loss. He pitched only 4 times that season. going 0-3, 8.02, then went on the disabled list with inflammation in his right elbow. He went on a couple of minor league rehabilitation assignments, but did not make it back to the majors and on August 29th, he was handed his unconditional release by the Indians, bringing his playing career to an end.

Myers was an amateur boxer as a teenager. On June 23, 2006, he was arrested and charged with domestic assault and battery after allegedly punching his wife.