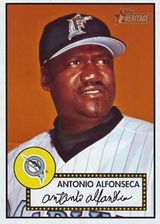 Antonio Alfonseca was born with 6 toes on each foot and 6 fingers on each hand, earning him the nickname "El Pulpo".

As a rookie in 1997, he was a key contributor to the World Champion Florida Marlins. He was one of the few players not to be sold away in the ensuing tear down, winning the National League Rolaids Relief Award in 2000 with the Fish behind a league-leading 45 saves (despite a bloated 4.24 ERA).

He was dealt to the Chicago Cubs during spring training 2002, weeks after a bizarre incident in which he confronted manager Jeff Torborg's son Dale, a 6'6", 270 lb. former professional wrestler and star of World Championship Wrestling (WCW) as "The KISS Demon", following a request to be weighed due to the conditions of an off-season surgery Antonio had undergone. Diminishing returns as a closer plus a 2003 suspension for bumping an umpire with his belly during a game at Wrigley Field hastened Alfonseca's departure from Chicago and ultimately his decline. He was finished after the 2007 season, his fourth straight with a different team. During his career, he primarily wore number 57.