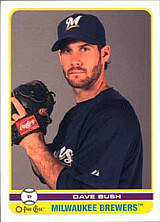 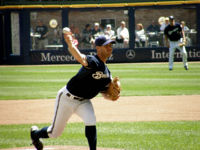 On August 11, 2010, David Bush set a major league record by giving up four consecutive home runs to the Arizona Diamondbacks. The four gopher balls in an inning also tied a National League record.

Bush was a solid contributor to the Milwaukee Brewers rotation in the mid-2000s, obtained from the Toronto Blue Jays before the 2006 season in a deal involving first baseman Lyle Overbay. He was a 12 game winner in back-to-back seasons (2006 and 2007) becoming a free agent after the his ill-timed gopher ball game season of 2010. Following 17 adequate offerings with the Texas Rangers in 2011, he spent 2012 in Triple A Lehigh Valley of the Philadelphia Phillies organization. He returned to where it all began, Toronto, a week into the 2013 season when future Brewer Jeremy Jeffress was DFAed. In a lone outing, relieving knuckleballer R.A. Dickey with an 8-0 deficit on April 7, he was bombed for 5 runs and 5 hits (4 homers) in 3 innings. He kicked around in Triple A for the remainder of the season, his last.

Bush coached for the South African national team in the 2017 WBC Qualifiers. In 2019, he was pitching coordinator in the minor league system of the Boston Red Sox. In 2020, he was promoted to pitching coach for the major league team.