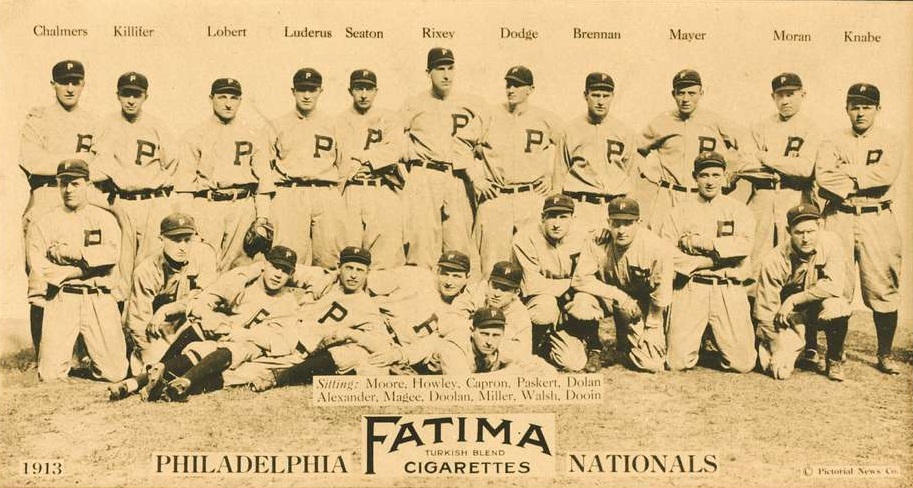 As they had done in 1912, the 1913 Philadelphia Phillies got off to a strong start, but could not hold on the first place when the dust settled. They were 32-13 on June 14th and were 5 games ahead of the surging New York Giants, who had just won 12 of 15. They were riding the arms of two pitchers, second-year man Pete Alexander and Tom Seaton, who were a combined 21-2 at that point. Three players were pacing the offense, Sherry Magee, Fred Luderus and Gavvy Cravath, who were leading most important hitting categories in the early going. By June 30th, the lead was down to a half-game as they began a four-game series with the Giants. Alexander lost the first two games, the first in relief and the second as the starter, then George Chalmers was beat up in the third game, before Alexander lost again in relief in the final game. The Phillies had met their match and while they finished second, they would never really threaten again: by the end of July, New York's lead was up to 8 1/2 games.

White Alexander and Seaton were not able to maintain their blistering early pace, they did go a combined 49-20, accounting for well over half of the team's wins. Another strong hurler was Ad Brennan, whose 2.39 ERA was 7th best in the NL and led the team (he finished at 14-12). By finishing second, the Phillies were the first team outside the dominant trio of the Giant, Pittsburgh Pirates and Chicago Cubs to finish first or second in the National League since 1902.

A very famous incident occurred in a game between the Phillies and Giants at National League Park on August 30th. In the top of the 9th inning, with New York trailing 8-6, Giants manager John McGraw asked umpire Bill Brennan to have spectators removed from the center field bleachers as they were, he claims, distracting his hitters. When Phillies acting manager Mickey Doolan refused to do so (the gesture would probably have caused a riot), he forfeited the game to the Giants, and bedlam ensued nonetheless. Brennan was attacked by irate fans when he tried to board a train out of Philadelphia later that day and had to receive armed police protection. The Phillies appealed to National League President Thomas Lynch, himself a former umpire, and he reversed the ruling, awarding the Phils an 8-6 win. It was now the Giants' turn to be appalled, and they appealed to the League's Board of Directors, who ruled that both Brennan and Lynch were wrong, and ordered the game to resume at the point where it was interrupted. That took place on October 2nd, and no further scoring occurred.