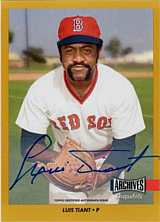 Luis Tiant is the son of Luis Tiant, Sr, a star pitcher in the Negro Leagues and in Cuba. The junior Tiant's Cuban birth led to much speculation throughout his Major League career that he was much older than his listed birth date of 1940. These rumors became so commonplace by the end of the 1970s that he was regularly referred to as "the ageless Luis Tiant". However, right from his debut in 1959 at the perfectly reasonable age of 19, the shape and length of his career is consistent with his listed date of birth.

Tiant won more games in the major leagues than any other Cuban-born pitcher in the 20th Century, having 35 more than Dolf Luque and 44 more than Mike Cuellar. He ranks fourth among all Latin American natives, trailing Bartolo Colon (247), Dennis Martinez (245) and Juan Marichal (243).

Tiant started off meekly with the Mexico City Tigers in 1959, going 5-19 with a 5.92 ERA. He was second in the Mexican League in losses and had the second-worst ERA of any regular pitcher. He allowed 107 walks and 214 hits in 184 innings while only striking out 98. In 1960, he improved significantly, with a 17-7, 4.65 record, though he walked 124 in 180 innings. That year Tiant led the Liga in walks but also tied two other hurlers for the lead in victories. The next year, Tiant was 12-9 with a 3.79 ERA, walking 106 in 145 innings, but his strikeouts (141) finally outpaced his walks. The Cleveland Indians purchased his contract from the Mexican League in 1962.

In 1962, Tiant had a 7-8, 3.63 record for Charleston Indians and appeared very briefly with the Triple A Jacksonville Suns. In 1963, Luis posted a 14-9, 2.56 record for the Burlington Indians. He tied for 5th in the Carolina League in wins and was in the top 10 in ERA. The next season, the young right-hander won a remarkable 25 games. He had a 15-1, 2.04 record for the Portland Beavers and tied Wilbur Wood, Bruce Howard and Dave DeBusschere for third in the Pacific Coast League in wins, one behind co-leaders Bob Locker and Ken Rowe. This led to his call-up to Cleveland, where he won 10 more games with the 1964 Indians. 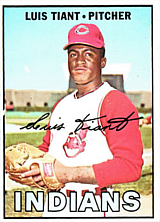 In his youth, he was a fireballing pitcher for Cleveland. He had a remarkable year in 1968, going 21-9, 1.60 with 9 shutouts and 264 strikeouts in 258 innings. During the year, he had a streak of 42 consecutive scoreless innings. Even in the Year of the Pitcher, this was serious excellence, although he was overshadowed by Denny McLain's 31-win season. He started the All-Star Game that year and was charged with the loss thanks to an unearned run in two innings of work, as the game, fittingly, ended 1-0. On July 3rd, he struck out 19 batters in a ten-inning game, setting a new Indians record for most strikeouts by a pitcher in a game (Bob Feller had struck out 18 in a nine-inning game in 1938). He fell to 9-20, 3.71 in 1969, as his strikeout-to-walk ratio completely tanked, leading to suspicions that he was pitching hurt. After the season, he was sent to the Minnesota Twins in a major trade also involving pitchers Dean Chance and Stan Williams. He pitched very well at the start of the 1970 season, and by the end of May was 6-0 with a 3.12 ERA, when he went on the disabled list with arm troubles. He came back in early August, but only won one more game the rest of the way, and then gave up a run in two-thirds of an inning in a relief appearance when Minnesota was swept by the Baltimore Orioles in the 1970 ALCS.

Tiant's arm problems only got worse in the offseason, and the Twins released him at the end of spring training in 1971. He was picked up by the Boston Red Sox, but was 1-7, 4.85 for his new team and only 3-5 with a 4.17 ERA in Triple A. His fastball was gone, and he seemed to be washed up. He began a remarkable comeback in 1972, reinventing himself as a junkballer, throwing an incredible variety of pitches from all sorts of arm angles. All of these came off a bizarre motion that had him looking straight at second base in the middle of his windup. Baserunners claimed that he committed a balk on every pitch, and batters were frustrated by their inability to pick up the ball until he released it. A big bushy mustache, an affection for cigars, and a thick Spanish accent in interviews added to his image. Fans loved it, and he became one of the most popular players in the game. It helped that his shtick was highly successful. After starting 1972 in the Red Sox bullpen, he moved to the rotation to stay on August 5th and pitched complete games in his first seven starts, all of them wins and four of them shutouts. After a loss, he pitched four more complete game wins (two shutouts) as the Red Sox found themselves in a tight pennant race with the Detroit Tigers. The fairy tale ended on October 3rd when, with two games remaining and the Red Sox trailing the Tigers by half a game, he suffered a 3-1 loss against Detroit's own miracle man, Woodie Fryman. The loss clinched the pennant for Detroit. Tiant's record for the year was a remarkable 15-6 with a 1.91 ERA. He was named the American League's Comeback Player of the Year.

Tiant continued where he left off over the following seasons, winning 20, 22, 18 and 21 games between 1973 and 1976. Ironically, the year he failed to win 20 games, the Red Sox won their only pennant of the 1970s. Tiant pitched a three-hit shutout over the Oakland Athletics in Game 1 of the 1975 ALCS, then pitched another shutout in the opening game of the World Series over the Cincinnati Reds. He pitched another complete game victory in Game 4, but needed 163 pitches to tie up the Series at two games apiece. He started Game 6 after a number of rain delays, but, staked with a 1st inning 3-0 lead, he was lit up by the Reds and left after seven innings with Boston trailing 6-3, setting the stage for the dramatic home runs by Bernie Carbo and Carlton Fisk that gave Boston a 7-6 win in what has been called the most thrilling World Series game ever played. 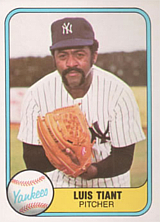 In a statistical fluke, Tiant holds the record for most complete games pitched in a season without a shutout, 23, in 1973. He pitched seven one-run complete games, including a contest called after six innings and another game that lasted 12. The season before, he tossed 6 shutouts; the following year, a league-leading 7. After going 12-8 and 13-8 in 1977 and 1978, he signed a big free agent contract with the New York Yankees although he was already 38 years old at least (and rumored to be much older). He pitched well in his first season with the Yankees, going 13-8, 3.91 as the team had a turbulent off-year in 1979. He was the team's best pitcher behind their ace Ron Guidry, but showed the first signs of age in 1980 as he went 8-9 on a team that won over 100 games to win its fourth division title in five years. He was not used in the 1980 ALCS as the Yankees were swept by the Kansas City Royals and became a free agent again after the season. Widely expected to retire when no team showed interest, he wrangled a minor league contract from the Pittsburgh Pirates and went to pitch for the Triple A Portland Beavers 17 years after he had last played for Portland. He was 13-7 with a 3.82 ERA for Portland to punch a return ticket to The Show.

Tiant returned to the minors for one more year in 1983, going 8-6 with a 3.36 ERA for two Mexican League teams. Overall, he had a 48-51, 4.23 record in five seasons in the Liga and 62-34 in other minor leagues for a composite 330-267 professional career. In 1989, Tiant played in the Senior Professional Baseball Association. He began the season with the Gold Coast Suns and was traded to the St. Lucie Legends. He ended the season with an 0-1 record and a 5.40 ERA.

From 1998 to 2001, Tiant was the head coach at the Savannah College of Art and Design. He spent time as a minor league pitching coach in the organizations of the Los Angeles Dodgers (1992-1995) including the GCL Dodgers (1992), [[Yakima Bears (1993), Great Falls Dodgers (1994), Chicago White Sox (1997) and Boston with the Lowell Spinners (2002). In 1997, he was inducted into the Boston Red Sox Hall of Fame. He was elected to the Latino Baseball Hall of Fame as part of its 2011 class, the same year he was hired by Boston as a special assignment instructor.

Tiant guest starred during season one of the all-time great comedy Cheers, filming a commercial with Sam Malone (Ted Danson) in the episode "Now Pitching, Sam Malone". In 2009, he was the subject of The Farrelly Brothers and Kris Meyer documentary The Lost Son Of Havana.

Arguably, pitchers with lesser careers have been elected to the Baseball Hall of Fame over El Tiante. Luis sadly never received more than cursory support from the BBWAA, his highest numbers coming in his first year of eligibility, 1988, when he received 30.9% of the vote. That was just after the election of Catfish Hunter, whose career numbers are very similar to Tiant's. His vote totals dropped shortly after that first year, due to an influx of 300-game winners and other very big names, including Nolan Ryan, Don Sutton, Phil Niekro, Jim Palmer and Ferguson Jenkins. Tiant suffered by comparison, as did other otherwise qualified pitchers such as Tommy John and Jim Kaat. He dropped off the ballot after 15 years, then fell short in Veterans Committee elections in 2011, 2014, 2017 and 2018. Following his coming up short in 2014, Tiant stated that he had encouraged his family not to attend any induction ceremonies should he be inducted to the Hall posthumously.