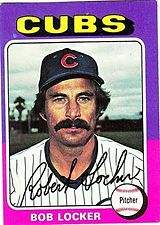 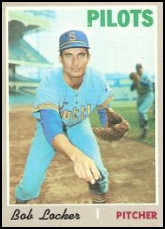 Bob Locker pitched in 576 games but never started a game in the Major Leagues, unusual for a player in his era.

He was the losing pitcher in Game 4 of the 1972 ALCS pitching for the Oakland A's against the Detroit Tigers. He came on in the bottom of the 10th with the A's up, 3-1. He gave up singles to Dick McAuliffe and Al Kaline. Joel Horlen and Dave Hamilton were not able to get out of the jam and the A's lost the game, 4-3, in 10 innings. The A's did win the series and the World Series. Locker pitched a third of an inning in the World Series, giving up 1 hit.

His first Baseball Card appearance was in the 1965 Topps set.