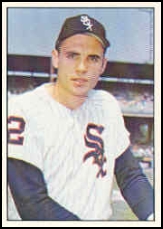 Dave DeBusschere was a Hall of Fame basketball player with the Detroit Pistons and New York Knicks. He also briefly served as commissioner of the American Basketball Association. In his baseball career, he pitched a couple of seasons in the majors at ages 21 and 22, appearing in 36 games with an ERA of 2.90 with the Chicago White Sox.

When he broke in with the Sox in 1962, he was half the age of his 42-year-old teammate Early Wynn.

He pitched a complete game shutout on August 13, 1963 against the Cleveland Indians. He gave up 6 hits, walked 1 and struck out 3. He only had 1 career hit in 22 at bats, a single off Bennie Daniels on July 17th of that year. That year, the White Sox were prevented by Commissioner Ford Frick from sending DeBusschere to the minor leagues because of the signing bonus he had received. They decided instead to send down a young Denny McLain, thus exposing him to the minor league draft.

During three years in the minors, he had a record of 40-21. He went 15-8 for the Indianapolis Indians in 1964 and 15-12 in 1965; the White Sox's failure to call him up after those two solid seasons were a major factor in his decision to concentrate solely on basketball starting in 1966.