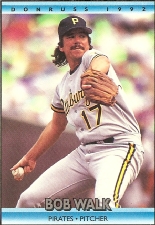 Bob Walk has spent over 30 years in professional baseball. He won three minor league ERA titles and just missed a fourth. In the major leagues, he won over 100 games and was an All-Star once. He then became an announcer.

Bob graduated from Hart High School in California in 1974. He then attended College of the Canyons JC in Valencia, CA a top JC for baseball at that time. The person most influential on his young baseball life was his grandfather who bought him his first glove.

In 1979, Walk was promoted to the Reading Phillies, where he was even more dominant with a 12-7, 2.24 record. He led the Eastern League in both ERA and strikeouts (135). He joined Dave Righetti as the EL's two All-Star pitchers. He won the ERA title by .71 over runner-up Mike Griffin.

Walk faced the defending World Series champion Pirates in his major league debut on May 26, 1980. He retired his first batter, Omar Moreno on a grounder to first, Walk getting the put-out. After striking out Tim Foli, Walk walked Dave Parker and surrendered a 2-run homer to Willie Stargell. After allowing 3 more runs in the third inning, he was relieved by Lerrin LaGrow.

Bob was 11-7 with a 4.57 ERA for the 1980 Phillies. After not pitching in the 1980 NLCS, he was the second Philadelphia Phillies pitcher to win a World Series Game. Hall of Famer Grover Cleveland Alexander was the first in Game 1 of the 1915 World Series. Walk finally repeated the feat 65 years later when, as a rookie, he started and won Game 1 of the 1980 World Series against the Kansas City Royals.

In 1985, Walk was healthy and again dominating in the PCL. He was 16-5 with a 2.65 ERA for Hawaii, leading the PCL in wins, ERA and complete games (12). He made the league All-Star team. He returned to Pittsburgh for 9 more games, going 2-3 with a 3.68 ERA. He would only have one more brief minor league stint in the next 8 years.

Walk was 7-8 with a 3.75 ERA and 2 saves in 1986, starting the year in the bullpen and moving into the rotation as the year progressed. Bob went 8-2 with a 3.31 ERA in 39 games for the 1987 Pirates. He had again begun the year in relief, becoming a starter once more after Rick Reuschel was traded.

Walk improved further in Pirates, with a 12-10 record and a 2.71 ERA. His 125 ERA+ was his best for a full major league season and he was 8th in the 1988 NL in ERA. The lone negative was his 13 wild pitches, leading the league, one ahead of teammate Mike Dunne. He was 10-4 with a 2.47 ERA before the All-Star break and 1-6, 2.88 thereafter as he got little run support. Walk made his lone All-Star team. In the 7th inning of the 1988 All-Star Game, he relieved Mark Davis and struck out his only opponent, Carney Lansford. Rafael Palmeiro pinch-hit for Walk in the bottom of the inning.

Walk won a career-high 13 games in 1989 and again lost 10 but his ERA jumped to 4.41 and his ERA+ fell to 76 as his record again proved deceptive of his actual performance. He was 10th in the 1989 NL in hits allowed (208) and his 96 earned runs allowed were just two behind league leader Kevin Gross. Walk battled hamstring and groin injuries during the campaign.

In 1990, the Californian hurler was 7-5 with a save and a 3.75 ERA as the oft-injured pitcher helped Pittsburgh make its first playoff trip in 11 years. Walk was on the hill when Pittsburgh clinched the NL East Division title. In the 1990 NLCS, he was 1-1 with a 4.85 ERA, winning Game One but losing Game Four when Jose Rijo outdueled him.

Walk had the worst ERA of any Pirate starter in 1991 but it was still around league average (3.60) and his record was 9-2. He hit the only homer of his career in his second start that season, taking Danny Jackson deep. He had a 1.93 ERA in the 1991 NLCS. In Game One, he relieved an injured Doug Drabek and worked three innings for the save. In Game Four, Walk tossed two shutout innings to help Pittsburgh tie the Series. Walk was again called on in Game 7 after John Smiley was roughed up, and allowed only one run in 4 1/3 innings but Pittsburgh could do nothing against Steve Avery and lost the Series.

Walk's role became much more important in 1993 with Drabek gone and Tim Wakefield suffering a sophomore slump. Walk went 13-14 with a 5.68 ERA as the staff workhorse. He tied John Smoltz, Curt Schilling and Andy Benes for 8th in the 1993 NL in home runs allowed (23) and surrendered 118 earned runs, most in the circuit.

Walk had an offer to continue pitching for the Detroit Tigers, but instead signed a deal to become a Pittsburgh Pirates broadcaster. He was interviewed for the managerial job of the Pirates after Gene Lamont was fired following the 2000 season, but the club opted to hire Lloyd McClendon instead.

Won a World Series with the Philadelphia Phillies in 1980