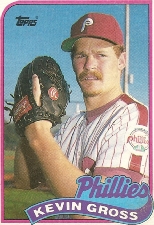 Kevin Gross won 142 games over 15 years in the majors.

Originally selected by the Baltimore Orioles in the 32nd round of the 1979 amateur draft, Gross opted for college instead and was then taken in the secondary phase of the January 1981 amateur draft. Signed by scout Bill Tracy, he made his pro debut that summer, winning 13 games for the Spartanburg Phillies.

Gross reached the majors in 1983, joining the Phillies' rotation in June and going 4-6 with a 3.56 ERA in 17 starts. The Phillies made it to the World Series, but he did not pitch in the postseason. After splitting 1984 between the bullpen and the rotation, he won 15 games for Philadelphia in 1985 to anchor the team's staff. He dropped to 12 wins in 1986, and on August 10, 1987, he was found to have sandpaper glued to his glove, leading to a ten-game suspension. He bounced back in 1988, going 8-5 with a 2.89 ERA in the season's first half, making the All-Star team for the only time in his career, and winning 12 games overall.

Dealt to the Montreal Expos following the 1988 season, Gross spent two years with the club before signing with the Los Angeles Dodgers after the 1990 campaign. In 1989, he was part of a starting rotation that also included Dennis Martinez, Mark Langston and Bryn Smith that had the Expos in first place until the end of July until the team collapsed; he finished that year 11-12, 4.38. In 1990, he started strong and was 8-5, 3.62, at the end of June before fading badly, ending at 9-12, 4.57. The Expos had considered signing him to a long-term deal when he was pitching well, but withdrew their offer when he hesitated, and after his collapse were glad that he hadn't bitten. He became a free agent as a result. The highlight of his time with the Dodgers came on August 17, 1992, when he threw a no-hitter against the San Francisco Giants. He moved on to the Texas Rangers in 1995 and led the American League that summer with 15 losses. He posted a winning record in 1996, going 11-8 despite a 5.22 ERA. The Rangers played in the postseason, but he was not used. He began 1997 in the minors before being released and then signed by the Anaheim Angels. He went 2-1 with a 6.75 ERA in a dozen games for the club before being released in late July, ending his career.

The most similar players to Gross through 2011, according to the similarity scores method, were Steve Trachsel, Jim Clancy, and Steve Renko.

Also a successful artist, Gross lettered in baseball, basketball and football at Fillmore High School in Fillmore, California. He is the father of minor leaguer Chad Gross.