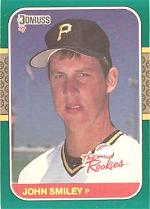 John Smiley was signed as a 12th round pick in the 1983 amateur draft by the Pittsburgh Pirates and scout Joe Consoli. While Smiley never threw a no-hitter in his career, he did throw 3 one-hitters. He was one of the mound mainstays of the strong Pittsburgh Pirates teams managed by Jim Leyland in the early 1990s, alongside Doug Drabek. His best season was 1991 when he went 20-8, 3.08 in 33 games and was named to the All-Star team.

The Cleveland Indians acquired Smiley along with Jeff Branson for the pennant drive in 1997. He made six starts for the Tribe, after which injuries took their toll and ultimately ended his career. He suffered from tendonitis and was sidelined for three weeks at the beginning of September. On September 20th, he was preparing to make his first start since August 30th. While finishing up his warm-up pitches prior to that evening's game against the Kansas City Royals at Kauffman Stadium, Smiley's arm broke near the shoulder mid-pitch while throwing a curveball. Jeff Juden spot-started in his stead. He would never pitch again.