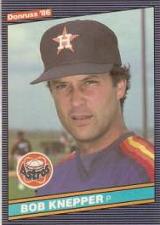 Bob Knepper was drafted by the San Francisco Giants in the 2nd round of the 1972 amateur draft. The 18-year-old left-hander started his pro career with the Great Falls Giants of the (Rookie) Pioneer League shortly thereafter. He hung up a 7-1 record in 12 games for a 1.46 ERA. He spent four more years in the minors with the Fresno Giants, Decatur Commodores and the Phoenix Giants before getting his first look at major league hitters in 1976. He picked up 1 win and 2 losses in 4 games and 25 innings with a 3.24 ERA during this short stay.

Knepper went 3-6 with the Phoenix Giants in 1977 and also picked up 11 wins against 9 losses with a 3.36 ERA in his first real go at the big leaguers. Knepper stepped into San Francisco's starting rotation, replacing injured John Montefusco.

The following year, 1978, Knepper led National League lefthanders in ERA, led the entire league in shutouts, and won a career-high 17 games. Two straight off-years resulted in a trade to the Houston Astros for Enos Cabell, where Knepper became the winningest lefthander in team history. He was the NL Comeback Player of the Year in 1981 (9-5, 2.18), finishing second to teammate Nolan Ryan in the ERA race.

From 1984 to 1986 Knepper was one of the NL's best lefties. His 17 wins in 1986 tied the Astros record for lefthanders. He also tied teammate Mike Scott for the league lead with five shutouts. Knepper took leads to the 9th inning in Games 3 and 6 of the 1986 NLCS, but the New York Mets rallied to win both games, and the series.