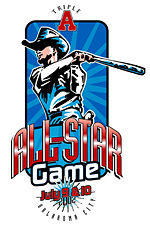 The 2002 AAA All-Star Game was played on July 10, 2002 in Oklahoma City, OK. The Event was hosted by the Oklahoma Redhawks, the AAA affiliate of the Texas Rangers.

The Pacific Coast League served as the home team. The PCL All-Stars were managed by Dan Rohn of the Tacoma Rainiers. His assistants were Mike Hart of the Fresno Grizzlies and Jim Hickey of the New Orleans Zephyrs. The International League team was managed by Dave Miley of the Louisville Riverbats. Grant Jackson of the Rochester Red Wings and Eric Wedge of the Buffalo Bisons served as his coaches. The game was broadcast on ESPN2 with Bob Carpenter, Tom Candiotti , Lisa Winston and Peter Gammons calling the game.

Pitching dominated the game for the PCL. Nine pitchers pitched scoreless ball allowing only four hits. The PCL put up three runs in the sixth on three hits. Insurance runs in the seventh and eighth, including a Jack Cust home run gave the PCL the 5-0 victory. Shane Nance of the Las Vegas 51s got the win, while Indianapolis Indians pitcher Derrin Ebert took the loss.

The Stars of Stars Awards were given to the game MVP from each team. The International League award went to Doug Linton of the Richmond Braves who struck out three while allowing one hit in two innings of work. Jack Cust of the Colorado Springs Sky Sox won the award for the PCL going 2-2 with a home run and 2 RBI.