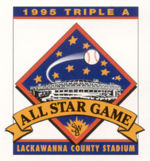 The 1995 AAA All-Star Game took place on July 12, 1995. The eighth annual game was played at Lackawanna County Stadium, home of the Scranton/Wilkes-Barre Red Barons, the AAA affiliate of the Philadelphia Phillies.

The National League would be the home team for the sixth time in the games history. The NL squad would be managed by Richmond Braves manager Grady Little. His assistants were Marc Bombard of the Indianapolis Indians and Brad Mills of the Colorado Springs Sky Sox. The American League team would be led by Chris Bando of the New Orleans Zephyrs with coaches Buddy Bailey from the Pawtucket Red Sox and Gary Ruby from the Vancouver Canadians. The game would air on ESPN2 with Matt Vasgersian, Steve Garvey and Mike Mayock calling the game.

The AL team would jump out to an early 3-0 lead against NL starter Jason Isringhausen. The NL defense did Isringhausen no favors in the first as they also committed three errors. The AL would add runs in the 3rd, 4th, and 5th to take a 6-0 lead in to the 8th when Luis Lopez hit a three run home run to seal the 9-0 victory for the AL. AL pitchers dominated the game allowing only two singles and one walk to NL batters. The win went to Pat Ahearne and the loss to Isringhausen.

The Stars of Stars awards were given out to one player from each minor league. The International League award was given to Syracuse Chiefs third baseman Howard Battle for going 3-5 with 2 runs scored. The American Association award went to Luis Lopez from the Buffalo Bisons. Lopez, who won the IL’s Star of Stars in the 1994 AAA All-Star Game, got the award this year for his 3-5, 3 runs scored, 4 RBI performance capped off by his three run home run. The Pacific Coast League award was won by Salt Lake Buzz outfielder Riccardo Ingram. Ingram went 1-3 with an RBI.