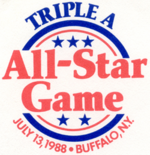 The 1988 AAA All-Star Game was played before a sold out crowd of 19,500 at Pilot Field in Buffalo, NY, home of the Buffalo Bisons, on July 13, 1988. The game would be the first to bring the stars of all three AAA leagues together. The first AAA All-Star Game had Stars from the International League, Pacific Coast League and American Association all descending on Buffalo with hopes to prove themselves ready for the next big step in their careers.

The players were divided by their parent clubs' leagues, to set up an AL affiliates vs NL affiliates game. The American League team would be managed by Pawtucket Red Sox (Red Sox) manager Ed Nottle with Oklahoma City 89ers (Rangers) manager Toby Harrah and Calgary Cannons (Mariners) manager Bill Plummer as his assistants. The National League would be managed by Terry Collins of the Albuquerque Dukes (Dodgers). His assistants were Mike Cubbage of the Tidewater Tides (Mets) and Joe Sparks of the Indianapolis Indians (Expos).

The game would be a pitchers' duel, with starters Roy Smith and David West each throwing 2 shutout innings with 2 strikeouts. The AL would take an early lead in the 3rd when Eric Yelding scored on a Marty Brown error. The AL would keep the lead until the bottom of the 7th when Gregg Jefferies hit a home run off of Urbano Lugo to tie it up. After a scoreless 8th the AL was able to take advantage of an Ed Jurak lead off triple. The next batter Bob Geren ground out to short but Jurak was able to come in and score the go ahead. Donn Pall and Mike Kinnunen would come in and shut down the NL in the bottom of the 9th to make the run stand up for an AL 2-1 victory. Lugo was awarded the win, Kinnunen the save and Joe Boever took the loss. Jurak was named the games MVP.