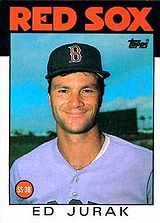 Ed Jurak was drafted by the Boston Red Sox in the third round of the 1975 amateur draft. The 18-year-old's first season was spent with the Elmira Pioneers of the class A (short season) New York-Pennsylvania League.

Jurak spent until 1982 in the Boston minor league chain before getting his first taste of major league ball. He appeared in 12 games for the Red Sox before being sent to the International League Pawtucket Red Sox for the rest of that season.

Jurak appeared in only 30 games with the Giants and on September 4, 1989 the Giants sent him to the Montreal Expos as part of a conditional deal. On October 15th he was again granted free agency.

The much-traveled Jurak spent 1990 with the Pacific Coast League Calgary Cannons and after 16 seasons in both the minor and major leagues, decided to call it a career.

Ed's major league stats show him with parts of six different years, playing in 193 games, 302 at bats with 80 base hits for a .265 batting average. His OBP was .346. His overall fielding, mostly as an infielder, showed an overall .958 percentage.