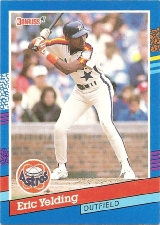 Eric Yelding was second in the National League in stolen bases with 64 in 1990. He was a regular for the Houston Astros that season, splitting his time between center field and shortstop. He hit .254 in 142 games that year.

Nickname was "Cool Breeze", due to his blazing speed.