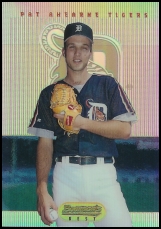 Pitcher Pat Ahearne played for teams in the United States, Venezuela, Taiwan, the Czech Republic, Canada and Australia and played for a Russian team in the European Cup as well. He won the finale of the 1992 College World Series to give Pepperdine University its first College World Series title. He was the Pitcher of the Game in the 1995 AAA All-Star Game, the year he had his only chance at the majors. He later would lead a Triple A loop in wins. Ahearne won a Double A ERA title in a season he began outside of organized baseball, one of two ERA titles he picked up in a year's span, and set the career ERA record in the Czech Republic.

Ahearne was excellent as a college senior, going 15-2 with a 2.40 ERA for Pepperdine. He was a consensus All-American, joining Jeff Alkire, Lloyd Peever and Darren Dreifort in being picked by Baseball America, Collegiate Baseball and the American Baseball Coaches Association. He tied Roger Bailey for second in NCAA Division I in wins (two behind Mike Romano) and tied Darrell Richardson for 14th with 127 strikeouts.[1] He led the West Coast Conference in wins and strikeouts and was 3rd in ERA, winning WCC Pitcher of the Year honors.[2] He was 2-0 with no earned runs in 14 innings in the 1992 College World Series and won the finale over Cal State Fullerton, 3-2 (1 unearned run in 6 2/3 innings) to give Pepperdine its first College World Series title. Baseball America called him "an Orel Hershiser clone" and he made the All-Tournament Team, though Phil Nevin of Fullerton was named the tournament's outstanding player.[3]

The Detroit Tigers took Pat in the 7th round of the 1992 amateur draft; Ahearne's not being a hard thrower presumably led to his relatively low draft standing after his collegiate success. In the College World Series, announcer Jim Kaat had said: "Well, you're not going to get a ticket in a school zone throwing that hard."[4] He saw limited work that summer for the Lakeland Tigers (2 runs (1 earned) in 4 2/3 innings). He was 6-15 with a 4.46 ERA for Lakeland in 1993. He was second in the Florida State League in losses (one behind Brett Roberts) and was second among Tigers farmhands as well (one behind Ken Carlyle). He tied Terry Burrows, Todd Erdos and John Johnstone for 6th in the affiliated minors in losses.

With the Trenton Thunder in 1994, he improved to 7-4 with a 3.98 ERA. He spent most of 1995 with the Toledo Mud Hens. He did get a look with the Tigers for four starts in June. In his major league debut, against the New York Yankees on June 14th, he gave up a single to the first batter he faced, Luis Polonia, and a homer to the third, Paul O'Neill, finishing with 5 runs in one inning (reliever Brian Bohanon let one of the inherited runners score). He allowed 20 hits and 13 runs in 10 innings in the majors and would not get another look at big league ball in his long career. Returning to AAA, he got the start for the American League in the 1995 AAA All-Star Game. He tossed two hitless innings to beat the National League and Jason Isringhausen; Randy Marshall relieved. Ahearne was named Pitcher of the Game.[5] After the All-Star Game, he slipped to finish the year at 7-9, 4.70 for the Mud Hens.

Back in Australia in the winter, he began as pitching coach for the Gold Coast Cougars. He then returned to the playing field with the Melbourne Reds when Sloan Smith left due to arm tenderness. Pat was 3-4 with a 3.36 ERA the rest of the way, finishing 4th in the 1997-1998 ABL in ERA, behind only Erick Nelson, Brent Iddon and Shayne Bennett[7] He then faced his old Cougar mates in the finals and held them to 3 runs in 6 1/3 innings as Melbourne went on to win the title.[8] He saw limited work in the summer of 1998, going 2-2 with a 2.57 ERA for the independent Bridgeport Bluefish.

He won his first ERA title that winter in Australia. This time, he played for the Perth Heat and went 7-3 with a 2.17 ERA on a last-place team that otherwise was 10-25. He led the 1998-1999 ABL in ERA (.20 over Craig Anderson) and tied for first in wins despite his lack of support (even with Matt Herges and David White). He also led in complete games (5, one ahead of White) and lowest opponent average (.182, .028 ahead of Blake Mayo). He was 3rd with 72 whiffs (behind Herges and Jason Flach). He won Australian Baseball League Pitcher of the Year honors for his dominant work.[9]

Ahearne began the summer of 1999 back with Bridgeport and again did well (6-0, 2.53); his ERA would have led the Atlantic League had he qualified at season's end. He then signed with the Seattle Mariners and posted a 8-3, 2.61 mark for the New Haven Ravens for a 14-3 record on the summer. He walked only 27 in 124 innings for the Ravens. He won the Eastern League ERA title by .01 over Michael Tejera.[10] He also led Mariners farmhands in ERA.[11] He finished the 1990s with the Navegantes del Magallanes of the Venezuelan League, going 2-3 with a 1.59 ERA.[12] Had he qualified, he would have tied Edwin Hurtado for the league ERA title[13] He had pitched for 13 professional teams in three countries to this point but his wanderings around the baseball world had only just begun.

The veteran reinforced Russia's Tornado Balashikha in the 2008 European Cup, going 0-2 with a 2.40 ERA. He lost a 2-0 pitching duel to T & A San Marino's Horacio Estrada, taking a no-hitter into the 7th before Martin Vasquez tripled and Max De Biase singled. He then lost a 3-2 match to the Royal Greys and Daniel Howard in his second outing. He led a surprisingly strong staff composed otherwise of Russian natives (4.28 team ERA).[17]

Ahearne was back in the European Cup in 2009, this time with Draci Brno of the Czech Extraliga. Ahearne blanked FC Barcelona for six innings but faded, allowing 4 runs in the final three to take the loss.[18] He coached for the Czech national team in the 2009 Baseball World Cup.[19] In the 2010 European Cup, he was 0-2 with a 4.80 ERA, while Draci Brno's native Czech hurlers were 2-1. He led the Cup in losses. [20] In the Extraliga, he was much better at 1-0 with 12 shutout innings in the regular season then 4-0 with a 1.93 ERA in the postseason. He was named the best player of the playoffs.[21] He won games 1 and 3 of the finals as Draci Brno beat Technika Brno 3 games to 2.[22]

Ahearne was with Draci Brno for all of 2011 and went 9-1 with a 0.52 ERA, fanning 71 in 69 1/3 innings. He tied for second in the Extraliga in wins (two behind Marek Červenka, was 6th in strikeouts, led in ERA (1.14 over Červenka), led in opponent OBP (.238, .018 ahead of Červenka), was second in opponent slugging (.277, .021 behind Červenka) and was 4th in opponent average (.214). He had the 8th-best ERA in the Extraliga (from 1995-2011), the best ERA in the Extraliga since Lubomír Janda had 0.49 and Matthew Blackmore .50 in 2007. It was the third league in which he had won an ERA title, following the US's Eastern League and the Australian Baseball League. He was named Pitcher of the Year. He was somewhat less effective in the postseason at 1-0, 2.53, giving up 6 earned runs, more than he had the entire regular season. Draci Brno lost in the finals, ending a run of 16 straight titles, as Technika Brno beat them out.[23] He was assistant coach for the Czech team in the 2011 European Junior Championship.[24] 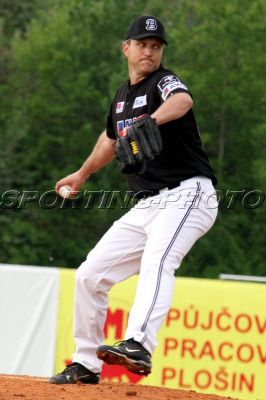 Playing in the Czech Republic.

In the 2011 European Cup, he allowed three runs (two earned) in 6 1/3 innings against Dutch powerhouse DOOR Neptunus before turning the ball over to fellow ex-major leaguer Greg McCarthy; Draci Brno wound up with a 4-3 upset win. In his other game, he allowed 1 run in 4 innings against CB Sant Boi before rain ended the game with a 1-1 tie.[25] He went to Australia that winter for the first time since the late 1990s, going 0-2 with a 9.31 ERA for the Adelaide Bite in the 2010-2011 ABL. [26] It is unclear if any other Americans played in both the first and second incarnations of the ABL.

The 42-year-old switched Extraliga teams for 2012, joining Kotlářka Praha as player-manager. He was 7-3 with a 1.61 ERA. He led the league in innings (95), complete games (8, double runner-up Martin Drong), opponent OBP (.235, .018 ahead of #2 Jan Homolka) and opponent average (.190, tied with Jan Blažek). He tied Petr Minařík for 4th in wins, was second with 76 strikeouts, was second in ERA (.25 behind Isaac Hess) and was second in opponent slugging (.263, .007 behind Daniel Vítek). He then led in playoff ERA as well (1.65, well ahead of Blackmore's .20). He repeated as Pitcher of the Year, the third time he had won such an honor with his ABL nod and two Extraliga selections. He had now worked enough innings to rank among the career Extraliga leaders - his 1.07 career ERA there was .31 ahead of former record-holder Jon-Jon Robles. He was also 5th with a .810 winning percentage, between Robert Paul and Pavel Budský).[27] He also coached for the Czech national team in the 2012 European Championship.[28]

Having already coached in Australia and the Czech Republic, Ahearne returned to Bridgeport yet again, this time as pitching coach for the Bluefish. He was 2-2 with a 7.14 ERA in seven games, as well.[29] He then was back with Technika Brno as pitching coach for 2014.[30] He also apparently returned to Bridgeport for part of the year.[31] He coached for Hong Kong when they won the 2018 East Asian Baseball Cup. [32] He also coached for them in the 2018 Asian Games. [33]