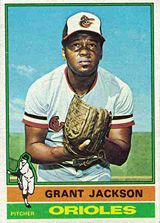 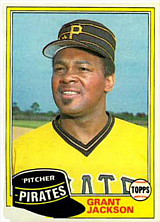 Pitching for the Pittsburgh Pirates, left-hander Grant Jackson won Game 7 of the 1979 World Series against the Baltimore Orioles in relief of Jim Bibby and Don Robinson. He came in with two outs in the 5th inning and the Pirates trailing, 1-0, and stayed on until the 8th, turning the ball over to Kent Tekulve with a 2-1 lead, following a two-run homer by Willie Stargell. That season, Pirates manager Chuck Tanner used his three top relievers, Jackson, Tekulve and Enrique Romo, in a way that was a presage to modern reliever usage, as all three often pitched in the same game in order to protect a lead, with Tekulve acting as the closer. Jackson pitched 75 times for the Pirates in 1979, going 8-5, 2.96, with a career-high 14 saves. His bullpen mates Tekulve and Romo pitched 94 and 84 times, respectively, that season.

When he joined the Montreal Expos late in the 1981 season, broadcaster Claude Raymond called him "the cleanest man in baseball", because he had been declared washed-up so many times. Raymond remembered him as a foe in the 1960s, when he was a hard-throwing young starter for the Philadelphia Phillies (he struck out 180 batters and went 14-18 while making the All-Star team for a weak Phillies team in 1969), but seemed done when he had a record of 5-15, 5.29 for those same Phillies in 1970. He re-emerged as a successful reliever for the Baltimore Orioles from 1971 to 1976. In 1973, forming an excellent lefty-righty relief tandem with Bob Reynolds, he went 8-0, the most relief wins without any loss in major league history. By the end of his tenure, he had become a junkballer, and he was a throw-in in the big 11-player trade between the Orioles and the New York Yankees on June 15, 1976, a trade whose big names at the time were Doyle Alexander, Ken Holtzman and Rudy May, but which also involved a number of players who went on to have long careers, such as Rick Dempsey, Tippy Martinez and Scott McGregor. He had an ERA of 5.12 when he was traded but pitched very well for the Yankees the rest of the year, going 6-0, 1.69 in 21 games and seeing action in the 1976 World Series. He had previously pitched in the postseason with the Orioles in the 1971 World Series and the 1973 and 1974 American League Championship Series.

The Yankees were not confident that Jackson could continue to pitch effectively and left him exposed in the 1977 expansion draft, when he was picked by the Seattle Mariners. The Mariners had little use for the aging pitcher and a month after the draft traded him to the Pirates for two infield prospects, Craig Reynolds and Jimmy Sexton. He pitched well for Pittsburgh for four seasons, from 1977 to 1980, but seemed to be running out of gas at the age of 38 in 1981, as he was down to being used as a LOOGY, logging only 32 1/3 innings in 35 outings for the Bucs. He still had a good ERA, at 2.51, and the Pirates only asked for a sum of money in return when the Expos acquired him for the pennant stretch that season. He had a 7.59 ERA in 10 games for Montreal, but did pick up one very important win against his former team on September 23rd, when he came in with the Expos trailing 2-1 in the 8th, and inherited the win when his teammates scored a run in the 8th and another in the 9th on a walk-off homer by pinch-hitter Jerry White, who was batting for him. Given the Expos won the second half title by only half a game, that win was essential. He was traded to the Kansas City Royals for Ken Phelps before the 1982 season but was back with the Pirates before the end of the year, making one final appearance on September 8th. This time, he was truly done as a major league player, after 18 seasons.

Jackson also played for the Gold Coast Suns of the Senior Professional Baseball Association in 1989.