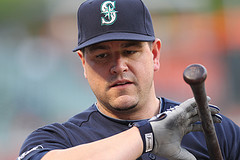 Jack Cust played ten seasons in the majors, showing power and a tendency to walk and strike out a lot.

He drew attention by hitting 7 home runs in his first 11 games with the 2007 Oakland Athletics. He was in his sixth year in the majors at that point, and in 2003, he had also slugged over .500 in 27 games for the Baltimore Orioles. He finished the 2007 season with 26 home runs and 82 RBI in 395 at bats, while walking 105 times and striking out 164. Still, this was good for an outstanding .408 on-base percentage and a 144 OPS+ as he split his time between the outfield and the designated hitter slot. In 2008, Cust became the ninth man to lead his league in walks and strikeouts in the same season, joining Jim Thome, Jason Giambi, Dale Murphy, Mike Schmidt, Mickey Mantle, Dolph Camilli, Hack Wilson, and Babe Ruth (four times).

Cust had played 10 seasons in the minors, hitting 191 home runs through 2006, including 30+ in a season in 1999 and again in 2006. He had long been a favorite of sabermetricians as an example of a player whose power and ability to draw a walk, amply demonstrated in the minor leagues, would make him a very useful major league hitter in spite of a high strikeout rate. But he was not able to get a team to give him a chance to play regularly and as a result, he bounced from organization to organization, never playing more than 35 games in the majors in any season until finally sticking with the Athletics. A good comparison of his talents would be Ken Phelps, who also took a long time to receive his first chance to play regularly.