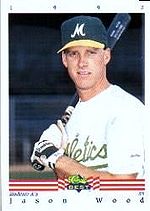 Wood, who had fair power, started off his professional career on a bumpy road - in three out of his first five minor league seasons, he had a batting average in the .230s. He did improve after a few years, hitting .321 in 1997. Near the middle of October, 1997, Wood was granted free agency. About 10 days later, he was re-signed by the Athletics.

On September 9, 2006, Wood played for the Florida Marlins in his first Major League game since October 1, 1999.

Wood pitched a total of 2 innings in his minor league career, all in 1996. He has an ERA of 0.00. He pitched one inning in the majors on June 29, 2007 for the Marlins against the Atlanta Braves. In the top of the ninth with his club behind 12-3, Wood set down Brian McCann, Jeff Francoeur and Kelly Johnson in order to record a perfect lifetime ERA of 0.00.

He currently lives in Fresno, California. Wood was hitting coach of the Bakersfield Blaze in 2009-2010.

On July 23, 2011 Wood was inducted into the Albuquerque Professional Baseball Hall of Fame for his achievements over five seasons with the Triple-A Albuquerque Isotopes.

Wood managed in the Texas Rangers minor league system for several years. He worked with the Myrtle Beach Pelicans, in the Carolina League in 2011-2013. In 2011, the Pelicans won the Carolina League Southern Division first-half title to clinch a postseason berth in Wood's managerial debut. Wood also managed the 2012 Surprise Saguaros of the Arizona Fall League.

He shares a name with a player agent named Jason Wood. Unfortunately, when the agent got in trouble in January 2018 because of allegations that he had spied on players showering with a hidden camera, initial reports conflated the two persons and claimed incorrectly it was him who had been suspended by the MLBPA.