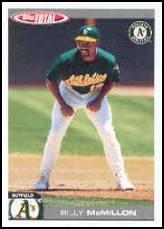 Billy McMillon played college ball at Clemson University and in 1993 was the first African American to represent Clemson on a baseball All-American team according to the Baseball Writers' Association of America. As a freshman in 1991, McMillon made an immediate impact when he led Clemson in hitting with a .391 batting average. He was a major reason Clemson won a school-record 60 games and reached the College World Series as the No. 1 a seed that year. McMillon finished his Tigers' career with a .381 batting average with 19 home runs and 105 RBIs.

An eighth-round selection of the Florida Marlins, McMillon played six years in the Major Leagues from 1996-2004. During these years he served as a backup outfielder and hit .268/.322/.396 while appearing in 269 games. He had much greater success in the Minor Leagues where he played 992 games and was named to the International League Hall of Fame in 2019. Despite being a replacement player in 1995, McMillon was allowed to join the Major League Baseball Players Association.

McMillon joined the professional coaching ranks in 2008 when the Boston Red Sox hired him as a coach. He worked in various capacities through the years before being released by the Red Sox after the 2021 season. In addition, McMillon served as the hitting coach for the Mesa Solar Sox in the Arizona Fall League after the 2009 season. In 2022 the Washington Nationals hired him as a development coach for their AAA team.

He was scheduled to manage the Pawtucket Red Sox in 2020 before the season was cancelled due to COVID-19.