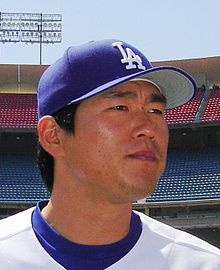 Hee-Seop Choi was the first position player from South Korea to play in Major League Baseball and participate in a Home Run Derby. He played for three teams over parts of four seasons.

Left hand and wrist injuries sidelined Choi frequently in 2001, and he only hit .229/.313/.417 for the Iowa Cubs. Baseball America still rated him the 14th best prospect in the Pacific Coast League, between Denny Stark and Joaquin Benoit. They also kept him the 3rd best prospect on the Cubs list. Choi was named the Cubs' Minor League Player of the Year in 2002 by hitting .287/.365/.484. He led the club's minor leaguers in walks (95) and runs scored (94), driving in 97 runs and hitting 26 home runs. He was 4th in the affiliated minor leagues in walks, leading the Pacific Coast League in that category as well as league first basemen in putouts (1,074). He was 5th in the league in runs scored and OBP. Lyle Overbay made the All-Star team ahead of him. In the 2002 Futures Game, he was 0 for 2 as the starting first baseman for the World team. Baseball America rated him the 4th best prospect among first basemen and 8th in the PCL between Colby Lewis and Bobby Hill and ahead of both Overbay and Travis Hafner.

Choi hit .345/?/.714 for the 2002 Mesa Solar Sox. He would have set the new Arizona Fall League slugging mark, breaking Hank Blalock's record, but Ken Harvey fared even better; in fact, Choi was just 5th in the league in slugging. Baseball America rated him the 7th prospect in the league, right behind Justin Morneau and two spots ahead of Harvey.

Choi only batted .180/.281/.320 in a September call up in 2002. In his major league debut, he was a defensive substitute for Fred McGriff. In his first at-bat, he struck out against Valerio de los Santos. Choi fared better the following season, being named the NL Rookie of the Month in April 2003 when he connected for five homers. But this would represent over half of his season's total. He was sidelined for a spell when he collided with Kerry Wood on June 7 while going after a Jason Giambi pop up. He struggled after that and was briefly returned to AAA. He batted .258/.351/.621 with 6 homers in 18 games for Iowa in 2003. In the bigs, he hit .218/.350/.421 while Eric Karros got most of the playing time at first base. Choi struck out 71 times in 202 at bats but did show a great batting eye and good power (17 doubles, 8 home runs).

On November 25, 2003, Choi was traded with Mike Nannini to the Florida Marlins for Derrek Lee. At the time, the statistically-oriented community raved that the trade was a great one for Florida, though in retrospect the opposite was clearly true. That winter, Choi hit .271 with 4 home runs for the Navegantes del Magallanes. On April 13, 2004, Choi was part of the first match-up of a Korean batter and pitcher in MLB history when he faced Sun-Woo Kim. Choi batted .270/.388/.495 in a stellar 95 games for the Fish. Nonetheless, he was traded on July 30, 2004, to the Los Angeles Dodgers, along with Brad Penny and Bill Murphy, for Paul Lo Duca, Juan Encarnacion and Guillermo Mota.

Choi only hit .161/.289/.242 in 31 games for the Dodgers in 2004. He was more productive in 2005, hitting .253/.336/.453 and tying for second on the team (with Olmedo Saenz, who he split first base duties with) in home runs (15). His 110 OPS+ was off a bit from his 116 mark of a year earlier. In the Home Run Derby that year, Choi represented South Korea and went deep five times, tying Andruw Jones for fifth among the 8 contestants and missing the cut for the second round. Other highlights included the first three-homer game by a player of Asian descent in MLB history, on June 12th. He homered six times in a three-day stretch from June 10-12, the 12th player in MLB history to have done so. He would be the last until Bryce Harper managed the feat in 2015. Surprisingly, his major league career would be over after that year. He had hit .240/.349/.437 in 363 major league games for a 107 OPS+.

Choi hit .182/.217/.364 for the South Korean national team in the 2006 WBC, but his one home run was a big one, a three-run pinch-hit shot off of Dan Wheeler that helped South Korea beat the USA. The Dodgers placed Choi on waivers towards the end of spring training, and he was claimed by the Boston Red Sox on March 24th. Choi battled a hamstring injury, a knee strain and a lower back strain, struggling with the AAA Pawtucket Red Sox, batting just .207/.347/.361 with 8 home runs and 27 RBI. The Tampa Bay Devil Rays signed Choi to a minor league contract on November 29th, but he decided not to pursue his career further in North America.

Choi returned to South Korea in 2007, signed by the last-place KIA Tigers on May 10th in an attempt to rejuvenate their season. The deal was for 800 million won in advance payments, a 350 million won annual salary, and 400 million won in options. The initial plan was for first baseman Sung-ho Jang to move to the outfield but this left the status of Larry Sutton questionable. Choi listed his goals as helping KIA to a Korean Series title and breaking Seung-yeop Lee's KBO home run record of 56, both of which seemed highly optimistic. He made his KBO debut on May 19th against the Doosan Bears, going 0 for 5 with a strikeout. Choi hit .337/.386/.528 in 52 games in his first KBO campaign. Had he qualified, he would have tied Jun-hyuk Yang for second in average, one point behind leader Hyun-gon Lee. Choi battled numerous injuries in 2008. He had headaches throughout spring training, missed about two months due to back problems and was sidelined later by left shoulder pain. He had two minor league stints and only hit .229/.295/.346 in 55 games when healthy.

In 2009, Choi rebounded, hitting .308/.435/.589 to help KIA win the regular season pennant as well as the 2009 Korean Series. He hit 33 home runs, drew 103 walks, scored 98 times and drove in 100. He tied Keun-woo Jeong for the league lead in runs scored, was second to teammate Sang-hyeon Kim in home runs, was second to Roberto Petagine in walks (one off the pace), tied Petagine and Dae-ho Lee for third in RBI, tied Sung-heon Hong for 5th in OBP and tied Hyun-soo Kim for third in slugging. Sang-hyeon Kim beat him out for KBO MVP honors but he was named the league's best first baseman.