The 2009 Korean Series was the 27th Korean Series. It was won by the KIA Tigers, the 10th title by the Tigers but their first in 12 years and their first since being sold to KIA. The Series went 7 games, with the finale not being decided until a Ji-wan Na home run in the 9th. Na was named Korean Series MVP. 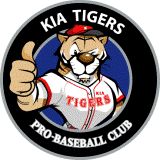 They were managed by Bum-hyun Cho.

The Wyverns were right behind KIA in the regular season at 80-47-6, one game off the pace. They lost their first two playoff games to the Doosan Bears but rallied to take the next three and advance to the Series. The Wyverns had won the prior two Korean Series.

They are managed by Sung-keun Kim.

SK took the lead in the third when RF Jae-hong Park singled home SS Joo-hwan Na. In the 4th, 2B Keun-woo Jeong and 1B Jung-kwon Park had back-to-back doubles off Lopez to make it 2-0.

Kadokura allowed his only run in the 4th when 3B Sang-hyeon Kim hit a sacrifice fly to bring in a run. Kadokura gave up one hit and fanned seven in five innings but was yanked at that point, perhaps due to his being on short rest.

In the 6th, veteran RF Jong-beom Lee came up with two outs and the bases loaded against Kil-hyun Yoon. Lee got the better of that match with a 2-run double to put the Tigers in front for the first time.

In the 7th, C Sang-ho Jung homered off Lopez to even the contest at three apiece. KIA mounted a rally in the 8th, getting two men in scoring position with one out. Again, Jong-beom Lee was put into a key role. The former Korean Series MVP again delivered, with a RBI single. C Sang-hoon Kim singled in one more for a 5-3 lead. Dong-hoon Yoo went 1-2-3 in the 9th for the save and KIA led, 1 game to 0.

In the first, SK quickly got to Rick Guttormson. LF Jae-sang Park doubled and 1B Jung-kwon Park singled him home. 3B Jeong Choi (the defending Series MVP) walked to begin the second and C Sang-ho Jung doubled for a 2-0 score. Jae-sang Park drew a third-inning walk and Jung-kwon Park homered to make it 4-0, knocking an ineffective Guttormson from the hill.

Gary Glover and his relievers held KIA hitless for 6 1/3 innings. Chi-hong An began with a single and Hyun-gon Lee singled as well; Jae-hong Park made an error on the play, advancing both runners. Seung-ho Lee threw a wild pitch to score An and close it to 8-1. Sang-hyeon Kim homered off reliever Hyo-joon Ko with three aboard in the 8th for a 8-4 game. SK scored three more in the 8th, then KIA got two in the 9th.

KIA hurler Hyeon-jong Yang retired his first five opponents but walked Sang-ho Jung then yielded a 2-run homer to Jae-hong Park to put the Wyverns ahead. Yang retired the next seven hitters before Jung doubled to again start trouble. Park bunted Jung over, then SS Joo-hwan Na doubled him in for a 3-0 lead.

In the 6th, KIA finally got to Byung-yong Chae with a solo homer by singles specialist Hyun-gon Lee. In the 8th, Jae-sang Park singled then Jung-kwon Park and Jung both walked. Dong-hwa Cho singled for a 4-1 SK lead.

KIA rallied in the 9th. Il-mok Cha led off with a pinch-hit single and Hee-seop Choi singled as well. With two away, Ji-wan Na singled for a 4-2 score. KIA loaded the bases against Kil-hyun Yoon. Sang-hoon Kim hit a grounder to Joo-hwan Na, whose error made it 4-3. Hyun-gon Lee came up, but grounded out to end the game.

#9 hitter Hyun-gon Lee led off the third with a double off Ken Kadokura, the first hit surrendered by the Japanese veteran. Won-seop Kim singled to short, then OF Yong-kyu Lee laid down a squeeze bunt.

Tigers outfielder Lee Yong-kyu's suicide squeeze in the third inning gave his side the much-coveted first run of the game and Lopez made it stand up as the winning run, notching six strikeouts in a four-hitter. In the 6th, Hee-seop Choi singled in Yong-kyu Lee for a 2-0 lead. Sang-hyeon Kim singled Choi to second. Jong-beom Lee grounded to 2B Keun-woo Jeong who threw to second for the force, but Kim slid in to break up the throw, scoring Choi for a 3-0 lead. SK skipper Sung-keun Kim appealed that there was interference on the play. When the umpire did not agree, Kim pulled his team from the field for 11 minutes. He was then ejected and the game continued; no Korean manager had ever been tossed from a postseason game before.

In the meantime, Dominican hurler Aquilino Lopez was stifling the Wyverns. In the 7th, they finally got a rally going when Ho-jun Lee walked and Jae-hong Park singled; an error put two men in scoring position with one out but Lopez got two in a row to escape. He finished with a four-hit shutout gem.

Catcher Sang-ho Jung was the early star for SK, throwing out runners in the first two innings. DH Ho-jun Lee homered off Suk-min Yoon for a 1-0 Wyverns lead in the second. In the third, Jae-sang Park doubled and later came in on a fly by Jung-kwon Park.

SK extended their lead to 3 in the 4th when PH Dong-hwa Cho singled home Ho-jun Lee. KIA was shut down for the first 7 innings as SK starter Eun-beom Song tossed five shutout innings and the bullpen tacked on two more. In the 8th, Hyun-gon Lee and Won-seop Kim hit singles with one out for KIA. Hyo-joon Ko issued a walk to load the bases. Hee-seop Choi hit a 2-run single to make it 3-2. Byung-yong Chae relieved to face the KBO's home run leader in 2009, Sang-hyeon Kim. Kim grounded out to end the threat with his team still down a run. Chae also tossed shutout ball in the 9th to wrap up the win.

At Jamsil Stadium, the Wyverns went ahead early on a 2-run homer by 1B Jung-kwon Park. SK went up 3-1 by the 6th, but KIA rallied with a 2-run homer by DH Ji-wan Na in that frame. Rookie 2B Chi-hong An hit a solo home run in the 7th to close it to 5-3; later that inning, Won-seop Kim tied it with a bases-loaded hit.

The game was still tied at five in the bottom of the ninth. With one out, Na homered off game six winner Byung-yong Chae to end the Series with a dramatic blow, earning Na Series MVP honors. It was Chae's last appearance for SK before entering into military service.