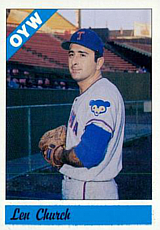 Pitcher Len Church played nine years in the minors and appeared briefly in the major leagues with the Chicago Cubs.

A Chicago native, Church attended Lane Tech High School, where one of his teammates was future big leaguer John Felske. After attending Wilbur Wright College, he was signed by the Cubs in 1963 and debuted that summer, going 4-11 with a 4.67 ERA for the St. Cloud Rox. While pitching for the Wenatchee Chiefs of the Northwest League in 1964, he threw a two-hitter, striking out nine in the process. He went 11-16 with a 3.45 ERA and 190 strikeouts for the Chiefs that year but missed most of the following season due to a shoulder injury. He bounced back in 1966, going 6-4 with a 2.90 ERA in 45 games for the Dallas-Fort Worth Spurs, and earned a late-season promotion to Chicago.

Church appeared in four major league games with the Cubs, facing six Hall of Famers: Joe Morgan, Phil Niekro, Hank Aaron, Roberto Clemente and Bill Mazeroski. He retired Niekro, Aaron, and Clemente, walked Torre, Morgan singled off him, and Mazeroski doubled. Church made his big league debut on August 27th facing the Houston Astros in the Astrodome. Entering the game in the bottom of the 7th inning, he walked Ron Davis. After retiring Bob Bruce, he allowed an RBI single to Morgan. After walking Sonny Jackson, retiring Bob Aspromonte, and walking Chuck Harrison to load the bases, he retired Rusty Staub to get out of the inning. He retired the side in the 8th and was pulled for a pinch hitter in the top of the 9th.

Two days after his debut, Church returned to the mound against the Atlanta Braves at Atlanta Stadium. He replaced Fergie Jenkins with one out in the bottom of the 9th and allowed Lee Bales to score on a sacrifice fly before getting out of the inning. With the score tied, 2-2, he held the Braves scoreless in the 10th before walking Joe Torre and giving up a single to Rico Carty in the 11th. He was then pulled in favor of Curt Simmons. Church pitched again on August 31st, facing the Cincinnati Reds at Crosley Field. Replacing Simmons with two outs in the bottom of the 8th, he gave up a three-run homer to the first batter he faced, Art Shamsky. He then retired Vada Pinson, the only other batter he faced. Church earned his one career decision, a loss, on September 4th against the Pittsburgh Pirates at Forbes Field. He replaced Bill Hands in the bottom of the 4th inning with the Cubs ahead, 5-4, and gave up a two-run single to Manny Mota and an RBI single to Matty Alou. Mazeroski scored on a Billy O'Dell single the next inning, and Church was pulled for a pinch-hitter in the top of the 6th.

Overall, in four games, Church went 0-1 with a 7.50 ERA and struck out 3 in 6 innings of work. He never had the opportunity to pitch in front of a hometown crowd at Wrigley Field. Following his stint in the majors, Church returned to the minors and went 8-2 with a 3.74 ERA with the Tacoma Cubs in 1969. He remained with Tacoma through 1971. After his career ended, Church became a golf pro in Texas. He died of a heart attack at 46.