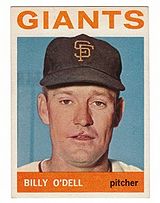 Lefthander Billy O'Dell played professional baseball from 1954 to 1967, with almost two years time lost for military service (1955-1956). The talented southpaw won all-conference honors at Clemson University three times and was selected a first team All-American in 1954. Following his junior year, he became the Baltimore Orioles' first ever Bonus Baby when he was signed by scout Art Ehlers for $12,500 on June 8, 1954. Billy never played a day in the minors. He made his major league debut on June 20th, pitching in relief in a doubleheader against the Washington Senators, walking Jim Busby, the first batter he faced. He appeared in only seven contests his first season, going 1-1 with a 2.76 ERA. Most of the next two seasons were spent in the Army and Billy rejoined the Orioles late in the 1956 season, appearing in only four games.

In 1958 Billy went 14-11 with a stingy 2.97 ERA for Paul Richards' sixth-place club. He was picked for the All-Star Game and pitched three perfect innings in the American League's 4-3 win at Memorial Stadium in Baltimore, MD. O'Dell retired nine straight batters, including such luminaries as Willie Mays, Ernie Banks and Stan Musial. In 1959, Billy had 10 victories with a 2.93 ERA for the Orioles and it was rumored that the New York Yankees tried to get the skillful lefty. However, Paul Richards wanted him out of the American League and he was traded to the San Francisco Giants on November 30, 1959 along with Billy Loes for Jackie Brandt, Gordon Jones and Roger McCardell. Under Richards, O'Dell was used as a starter and a reliever. During his double-duty career he appeared in 479 games, 199 as a starter and another 280 in relief.

With the Giants in 1960, Billy told manager Alvin Dark that he wanted to be either a starter or a reliever, but not both. Dark made one of the best decisions of his managerial career when he made Billy a starter, using him every fourth day. In 1962, Billy responded by going 19-14 with a 3.53 ERA. He led the National League pennant-winning Giants in strikeouts (195) and complete games (20). Four of his losses were by one run. At the end of the 1962 season the Giants and the Los Angeles Dodgers were tied and played a best-of-three playoff. O'Dell, pitching on a day's rest, got hammered in relief in the second game, won by the Dodgers 8-7, before the Giants won the deciding third game. In the World Series the Yankees would win out, 4 games to 3, and Billy lost the opener to Whitey Ford 6-2; he appeared in a total of three games.

In 1963, Billy came out of the gate 8-0. He then tore a ligament in his ankle running to first base; the injury sidelined him for several weeks, and he finished up the year at 14-10 with a 3.16 ERA. Primarily a starter in 1962 and 1963, O'Dell was switched to the bullpen in 1964 and again his career took on a Yo-Yo effect. On February 1, 1965, Billy was traded to the Milwaukee Braves for catcher Ed Bailey, one of his former battery mates. In Milwaukee, O'Dell formed a righty-lefty relief duo with Dan Osinski. Billy emerged as one of the top firemen in the National league that year, making 61 relief appearances and going 10-6 with a 2.16 ERA and 18 saves. Billy went to Atlanta with the Braves in 1966 but didn't get much of a chance to enjoy the climate as he was sent to the Pittsburgh Pirates for pitcher Don Schwall during the season.

O'Dell kept busy, going 5-5 with a 2.64 ERA in the split 1966 season, but a mysterious ailment sapped his strength. He lost weight and had no energy. Late in the season, his weight shrunk from 180 to 148 pounds. The 33-year-old pitcher spent one month in the hospital with the baffling illness. He was finally diagnosed with Addison's disease, a malfunction of the adrenal glands which makes it impossible for a person to retain salt in their body. Since his illness was found, O'Dell has taken cortisone daily. Billy ended his career in 1967 when he was released by the Pirates on September 1st. He finished out his 13-year major league run with 105 wins and 100 losses and a 3.29 ERA.

He retired in Chester, South Carolina, after being employed as a personnel manager at Newberry Mills, a cotton textile mill. In 1976, the hero of Newberry was inducted into the South Carolina Athletic Hall of Fame. He died in Newberry, SC in 2018 at the age of 85 of complications from Parkinson's Disease.