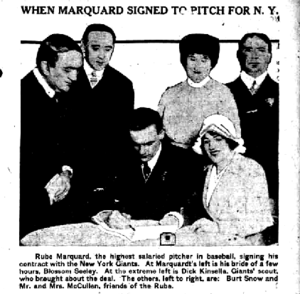 Kinsella at the far left, watching Rube Marquard sign for the Giants

Dick Kinsella was a minor league owner but most notable as a scout. His son Bob Kinsella played in the majors.

Kinsella played semipro baseball in Springfield, IL. There is a lot of uncertainty concerning his date of birth, as it is variously listed as taking place on October 20th or 21st, in 1862, 1864 and 1865; the one listed here comes from a passport application. He played semi-pro baseball as a youth before he became the owner of the Springfield Hustlers/Springfield Senators from 1904-1911. He was hired as John McGraw's lone scout for the New York Giants in 1907, moving to the St. Louis Cardinals in 1912 and New York Yankees in 1916 before returning to the Giants. In 1915, he and McGraw got into a fight with catcher Larry McLean; McLean escaped by jumping into a passing car. He was a delegate to the Democratic National Convention many times and was elected to the Sangamon County Board of Supervisors; he also was county treasurer and ran for sheriff.