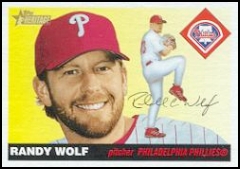 Randy Wolf is a left-handed starting pitcher who has played for the Philadelphia Phillies (1999-2006), the Los Angeles Dodgers (2007 and again in 2009), the San Diego Padres (2008), the Houston Astros (2008), the Milwaukee Brewers (2010-2012) and the Baltimore Orioles (2012). When healthy, he is one of the top lefties in the game, as evidenced by his 2003 All-Star season and other excellent seasons since. Blessed with a buckling "12-6" curve ball that can drop down to a speed in the 60-mph range, Wolf then strikes the batter out or induces an out with his fastball or change-up.

Wolf was originally drafted out of high school in the 1994 amateur draft by the Los Angeles Dodgers, but decided to attend Pepperdine University. Hef was then drafted by the Phillies in the 1997 amateur draft in the second round (54th overall). The Phillies' first round pick that year was J.D. Drew, who ended up not signing. Wolf quickly ascended through the minors, starting with the Batavia Muckdogs of the New York-Penn League in 1997. There, he went 4-0 in 8 starts, with a 1.58 ERA and 0.93 WHIP.

He followed that up with a good season in 2000, going 11-9 in 32 starts with a 4.36 ERA/1.42 WHIP. Though Wolf only had 160 strikeouts, he did eat up 201 innings. He had the most innings on the Phillies' pitching staff (they traded Curt Schilling during this season), and was also the only one to post double-digit wins.

Wolf came back strong in 2001, with a 3.70 ERA, though he was briefly demoted to the bullpen due to wildness. Wolf worked himself back into shape with three starts in the minors, and finished the year with an erratic 10-11 record in 161 innings, with 152 strikeouts.

He posted his best season in 2002, with a 3.20 ERA/1.12 WHIP with 172 strikeouts in 210 innings. Many thought he should have been an All-Star that year, but instead he was chosen in the next year. Wolf posted better numbers after the All-Star Break - a 7-3 record, 2.10 ERA, 0.93 WHIP, 3 complete games and 2 shutouts - and was viewed as one of the top lefties in the game entering the 2003 season. Wolf came back with the best record of his career, 16-10 in 32 starts, including 2 complete game shutouts. Unexpectedly, the innings were probably catching up with him and he missed significant time in 2004 and 2005 due to shoulder injuries, with a combined 36 starts.

On July 1, 2005, Wolf underwent Tommy John surgery. He went 4-0 over 12 starts late in the 2006 season, but with a poor 5.56 ERA, but still showed enough to convince the Dodgers to sign him as a free agent after the season. He went 9-6, 4.73, with almost a strikeout per inning for Los Angeles in 2007, but made only 18 starts because of health issues as the teram had a disappointing season. He then found a job with the San Diego Padres in 2008 and pitched well over the first half, prompting speculation that he would be traded to a contender given the Padres' poor start. The trade materialized at the end of July, but Wolf's destination was surprising: he was sent to the Houston Astros in return for Chad Reineke; at the time, the Astros were fourth in the NL Central and seemingly out of playoff contention. His record stood at 6-10 in 21 starts with the Padres. He went 6-2 in 12 starts with the Astros, rekindling interest in his services. The Dodgers signed him as a free agent in the off-season for another go round in Los Angeles. He did very well, pitching 214 innings in 34 starts with a record of 11-7 and an ERA of 3.23. He was particularly strong in the last two months of the season, going 6-1 after August 11 while the Dodgers went 8-2 over his last 10 starts. He started Game 1 of the NLDS against St. Louis - the first postseason appearance of his career - but was not involved in the decision. He also started Game 4 of the NLCS and again got a no-decision, giving up 3 runs in 5.1 innings in a game the Dodgers eventually lost 5-4 to the Phillies.

After the 2009 season, he became a free agent once again and this time signed a multi-year contract with the Milwaukee Brewers. He had a couple of very solid seasons for the Brewers, going 13-12, 4.17 in 37 starts in 2010, and then doing even better in 2011. That year, he was part of a very solid five-man rotation with Zack Greinke, Shaun Marcum, Yovani Gallardo and Chris Narveson, all five of whom won in double figures to lead the Brewers to their first NL Central title. Wolf made 3 starts and ended up with a record of 13-10 and a 3.69 ERA. In his first two seasons with Milwaukee, he had pitched over 200 innings. He lost Game 4 of the NLDS against the Arizona Diamondbacks when he gave up 7 runs in 3 innings in 10 10-6 loss, but came back in the NLCS with a solid performance against the St. Louis Cardinals in Game 4, when he limited the Redbirds to 2 runs in 7 innings for a 4-2 win. The Brewers lost the next two games, though, and were eliminated. Wolf struggled in 2012 however, as his record was only 3-10 with a 5.69 ERA in 25 games. On his birthday, August 22nd, the Brewers gave him his unconditional release, although he was confident of landing another job given his long history of success prior to that season. Indeed, the Baltimore Orioles signed him on August 31st. In his first game for his new team on September 2nd, he came in relief of Chris Tillman, who was taken out because of pain in his elbow, in the 4th inning of a game against the New York Yankees at New Yankee Stadium. He pitched 3 1/3 innings, only giving up one run, and was credited with the Orioles' 8-3 win. He only made 5 appearances - 2 of them starts - for the Orioles, with a record of 2-0, 5.28, before being sidelined with a torn ligament in his left elbow at the end of September.

Wolf's torn ligament required Tommy John surgery, and he sat out all of the 2013 season as a result. He was back on the field for spring training in 2014, having signed a contract with the Seattle Mariners, and showed that he was fully recovered. He made the team's roster as the fifth starter, but was then unable to come to terms with the M's, who wanted him to signed a consent that would have allowed the team to release him during the first 45 days of the season without being liable for his full salary. Wolf refused, explaining that he and the team had negotiated a contract in good faith a few months earlier and that the Mariners were in effect going back on their word, while Seattle explained what they were doing was common for a player with recent health issues such as Wolf. The result of the disagreement was that Wolf asked for and was granted his release on March 25th. He signed with the Arizona Diamondbacks, who assigned him to the AAA Reno Aces, where he went 5-1, 4.50 in 6 starts. His solid work did not go unnoticed, and since the Diamondbacks were not quick to bring him up, he exercised the exit clause from his contract to allow the Miami Marlins to bring him on board on May 14th, as they needed help following the season-ending injury to Jose Fernandez. His first appearance came that same day out of the bullpen, when he pitched three solid innings in relief of Anthony DeSclafani, who was making his major league debut, and earned his first career save in a 13-3 win over the Los Angeles Dodgers. He earned his first win as a Marlin on June 2nd, when he defeated the Tampa Bay Rays, 3-1, but only went 1-3, 5.26 in 6 appearances. He was released on June 18th,, then spent time in the Orioles and Los Angeles Angels of Anaheim organizations that season, but without making it back to the major leagues.

It took Randy some time to find a team willing to give him another shot in 2015, but the Toronto Blue Jays finally offered him a minor league deal on March 18th, after having lost starter Marcus Stroman for the year the week before. He never did pitch in Toronto that season, but did very well with the AAA Buffalo Bisons. In 23 starts, he was 9-2, 2.48, catching the attention of the Detroit Tigers who purchased his contract on August 20th and immediately inserted him in the major league starting rotation. The Tigers had just put two of their starters, Daniel Norris and Anibal Sanchez, on the disabled list and were badly needing some help.

Randy is the brother of umpire Jim Wolf and a cousin of former minor leaguer and 1984 Olympian Sid Akins.

From his second start with the Phillies, Randy Wolf had been followed by a fan group called the "Wolf Pack," who donned wolf masks, cheered him on and danced, and displayed a large banner. Explained the founder of the Wolf Pack:

"We were playing pool at my brother Albert's house, and we’re listening to the Phillies game like we always do," Kevin says. "Curt Schilling had been whining that the Phillies had no pitching, but here they bring this Wolf guy up and he's great. We just wanted to support him and show Curt Schilling that we did have pitching. So we took an old sheet from my mom's closet and wrote WOLF PACK on it, got some masks, and went to his next game."

The signature move of the Wolf Pack, and the one that got them on the nightly highlight shows, was the strikeout routine: An exaggerated umpire's punch-out, repeated 10 times and punctuated with a "Whooo!" [1]