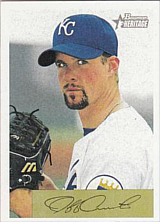 Austin was picked by the Montréal Expos in the 10th round of the 1995 amateur draft out of high school but opted for college. He was 6-4 with a save and a 3.81 ERA for Stanford in 1996; the team finished ranked 9th in the nation. As a sophomore, he fell to 6-2 with 4 saves and a 4.14 ERA, striking out 93 in 87 innings, but finished second on his staff in ERA. He excelled in the 1997 College World Series, going 1-0 with a save, 10 strikeouts in 10 innings and no earned runs allowed. He made the CWS All-Tournament Team. He had a 1-1, 3.55 record for Team USA in the 1997 Intercontinental Cup, striking out 13 in 12 2/3 IP. He got the tough call in the semifinals and was toasted by the Cuban national team. For the summer, he had a 4-1, 3.63 record and led the US club in wins. His junior year, he improved to 12-4 with a 3.11 ERA for Stanford, whiffing 136 in 133 innings. He was second in the Pacific-10 Conference in both wins and ERA, sharing Pac-10 Pitcher of the Year honors with Seth Etherton. He tied for 15th in NCAA Division I in strikeouts, tied for 15th in wins and was 5th in innings pitched. He was named a first-team All-American by both Baseball America and Collegiate Baseball; Josh Fogg was the only hurler selected by both publications that year. Interestingly, he was not named by the American Baseball Coaches Association (nor was Fogg), which picked Etherton, Mike Fischer, Jack Krawczyk, Alex Santos and Shane Wright instead. He also won the Baseball America Player of the Year, only the third hurler to do so in the award's 18 years to that point; Ben McDonald and Kris Benson had won previously.

Austin represents a classic example of the Kansas City Royals' draft mismanagement in the 1990s. The Royals, operating on a very limited budget and undergoing ownership problems, often drafted players based on signability. While Austin was national player of the year and deemed close to being major league ready, scouts rated some other pitchers higher (including teammate Chad Hutchinson, who had an even shorter big league career, proving the scouts are not always right). Austin was drafted 4th overall in the 1998 amateur draft, leaving pitchers such as CC Sabathia (who went 20th, Brad Lidge (17th) and Jeff Weaver (14th) on the table. The only three players taken before Austin were Pat Burrell, Mark Mulder and Corey Patterson. While he was drafted with signability in mind, he surprisingly held out for over six months, well after most of the other first-rounders had signed. His agent was Scott Boras.

Austin made his pro debut in 1999 with the High-A Wilmington Blue Rocks and went 7-2 with a 3.77 ERA. Promoted to the Wichita Wranglers, he had a 3-1, 4.46 record in six starts. He tied Jason Shiell for 8th in the Carolina League in ERA. Baseball America ranked him the league's 5th-best prospect after Kip Wells, Dee Brown, Rafael Furcal and Matt Riley and just ahead of Jon Garland. He started 2000 back with Wichita and did very well (2-2, 2.93, .210 opponent average), sending him up to the AAA Omaha Golden Spikes, where he performed worse (7-9, 4.48, .298 opponent average). He led Royals farmhands with 170 innings pitched that year. Baseball America listed him as the Royals' 5th-best prospect entering 2001, between Jimmy Gobble and Angel Berroa.

Austin was shipped to the Cincinnati Reds with Brian Shackelford for Alan Moye and Dámaso Espino. Back as a starter, he went 2-3 with a 8.58 ERA for the Reds in 2003. He walked 21 and served up 9 home runs in 28 1/3 innings. His final big league game couldn't have gone worse. Austin started on May 28th against the Atlanta Braves. He surrendered home runs to the first three Atlanta hitters - Rafael Furcal, Mark DeRosa and Gary Sheffield - and lasted just two thirds of an inning, being removed after seven batters faced. During that brief stint, he gave up five earned runs, inflating his ERA nearly a point and a half. It was only the second time in major league history that someone allowed 3 straight homers to open the game - Roger Mason had done it in 1987. Demoted to the Louisville Bats, Austin was 4-2 with a 4.34 ERA over the remainder of the year.

End of the Road[edit]