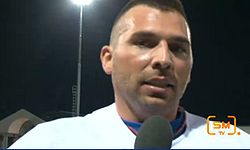 Tiago da Silva has played in Taiwan, Italy, San Marino, Venezuela, Mexico, the US and the Dominican Republic. He has been on the Brazilian national team and Italian national team, competing in the Baseball World Cup, World Baseball Classic, Intercontinental Cup and European Championship, winning Gold, Silver and Bronze. He has been very successful as both a starter, winning All-Star pitcher and Italian Series MVP honors in Italy, and as a reliever, finishing among the save leaders in the Mexican League and Venezuelan League. He even was a position player early in his career for Brazil and in Italy.

Da Silva was born in Brazil. Da Silva is part Japanese, and speaks Japanese, Spanish, Italian, and English, as well as his native language of Portuguese.

In the 2003 Baseball World Cup, da Silva was 2 for 4 with a walk and double for Brazil as a backup infielder; he also pitched, throwing 3 1/3 scoreless innings. He backed up Estevão Sato at 3B and Marcelo Okuyama at SS. He fielded eight chances without an error. His three appearances tied for second on the team, one behind Carlos Yoshimura. [1] In 2004, he pitched for the Macoto Cobras, but allowed 14 hits, 7 walks and 12 runs in only 4 2/3 IP. He had taken the place of fellow Brazilian Kleber Ojima, who was injured at the time. [2] He came to Italy and played in the Italian minors from 2005-2007, being used as a shortstop and pitcher. [3]

During 2008, he made his Italian Baseball League debut as a pitcher for T & A San Marino. He was 0-1 with a 10.38 ERA in the 2008 European Cup for third-place San Marino, getting roughed up by Kinheim, the eventual winner. [4] Da Silva turned in a fine outing in the 2008 European Cup Final Four finale, holding Danesi Nettuno to one run in 7 innings but his relievers failed to protect the lead. [5] He was 4-4 with a 1.92 ERA during the 2008 Italian Baseball League, finishing 6th in K (70) and was 8th in ERA (between Jesus Matos and Linc Mikkelsen). [6] San Marino won its first title.

Da Silva obtained Italian citizenship in 2009; he was eligible through marriage. [7] He struggled for Italy in the 2009 World Baseball Classic. Relieving Adam Ottavino in the 4th with a scoreless game against Venezuela, he retired Bobby Abreu but then gave up a double to Miguel Cabrera, a single to Magglio Ordóñez and a RBI double to Carlos Guillen. He intentionally walked José López to load the bases. Ramón Hernández hit into a two-run error by Nick Punto. César Izturis got plunked to load the bags again. Endy Chávez then hit a sacrifice fly to put Venezuela up 4-0. Da Silva did not wind up with Italy's highest ERA in the event as Kasey Olenberger and Lenny DiNardo were even higher. [8] He allowed two hits and no walks or runs in 5 innings in the 2009 European Cup, fanning 7 in a win over FC Barcelona. He took the loss to Enrique González. [9]

The right-hander was 8-4 with a 2.23 ERA in the 2010 Italian Baseball League. He tied Henry Bonilla and Jim Brower for 4th in the league in wins and was 5th in ERA (between Sandy Patrone and Bonilla). [12] In the 2010 European Cup, he had a no-decision against Telemarket Rimini (5 IP, 6 H, 6 R, 5 ER, 2 BB, 3 K); Mattia Salsi relieved. [13] In the 2010 European Championship, he allowed one run in five to beat Greece but gave up 3 runs in 2 innings of relief against Germany on homers by Edward Martinez and Dominik Wulf. He started the Gold Medal Game against the Netherlands and allowed a leadoff homer to Eugene Kingsale. The Netherlands loaded the bases but he did not allow another run. After Sidney de Jong walked to open the 2nd, Justin Cicatello relieved. Italy would rally for a 8-4 win, their first European title since the 1997 European Championship. [14]

In the 2010 Intercontinental Cup, he allowed one run in 6 2/3 IP, fanning seven, before Cicatello relieved against Nicaragua. He got a no-decision. He pitched four shutout innings versus Cuba but Yulexis La Rosa and Rudy Reyes opened the 5th with hits and both scored after Yovany D'Amico relieved. He tied Junior Téllez and Diegomar Markwell for 7th in the event in IP. For Italy, only Cody Cillo had a better ERA among the qualifiers. Italy won a Bronze, their first medal in a global baseball tournament. [15]

Da Silva blanked Cariparma Parma for 7 innings in the 2011 European Cup (3 H, 2 BB, 10 K) in a win (saved by Darwin Cubillan). [16] In the finale, he stifled Parma again, going the distance with a seven-hitter, fanning six and allowing one run. He did not win the MVP, which went to Mattia Reginato. [17] In the 2011 Italian Baseball League, he had a 7-1, 2.84 record. He tied Grifantini and Roberto Corradini for 5th in wins and tied Rodney Rodriguez for the most whiffs (95). In Game 3 of the 2011 Italian Series, he beat Nettuno and José Escalona with a complete game, allowing a two-run homer to Kelly Ramos but no other runs. With San Marino down 3 games to 2, he again pitched a two-run complete game (this time on 158 pitches) to win again. San Marino would take the Series. [18] He was back with Italy for the 2011 Baseball World Cup. He pitched well in his first game, holding the Dominican national team to 3 hits and 2 runs (one earned) in 5 1/3 before Luca Panerati relieved but lost to Ángel Castro, who threw a shutout. He only lasted 3 1/3 innings against Venezuela (6 H, 2 R, 2 ER, 1 BB, 2 K); Alessandro Maestri took over. His 3.12 ERA for the Cup nearly mirrored Italy's 3.08. [19]

The 27-year-old pitched four innings of a combined no-hitter against Croatia in the 2012 European Championship; the only baserunner came on a walk to Michel Čurić. Carlos Richetti completed the no-no. He next pitched a shutout inning against Greek. His third game was another gem; against Germany, he struck out 10 and walked none in eight innings of shutout ball, allowing six hits to outduel Luke Sommer. Holding a 1-0 lead in the 8th, with two on and two out, he retired future MLB star Max Kepler. Nick Pugliese saved the game for him. Among players in the championship round, no one pitched more innings without an earned run. Italy repeated as titlists. [23]

Returning to Europe for the 2014 European Championship, he closed out the win over Belgium. Relieving Pat Venditte with a 8-7 lead and two outs in the 8th, he struck out three of four batters (Vincent King, Yoni Vischschoonmaker and Dennis Ribbens; Robin Roevens grounded out). Relieving Venditte in the 8th, he closed out a win over Germany and allowed a Ludwig Glaser single but then retired six in a row, half by Ks. He saved Venditte's 6-4 win over Spain, striking out Jesús Golindano and Jesús Ustariz and getting Blake Ochoa on a grounder. Finally, in the Gold Medal Game against the Netherlands, he replaced Escalona in the 6th with a 4-0 deficit. He gave up a hit to Hainley Statia and walked Curt Smith then struck out Gianison Boekhoudt and Kalian Sams. Shawn Zarraga hit into a run-scoring error before Yurendell de Caster grounded out. After Italy scored three in the 7th, he retired Sharlon Schoop, yielded a Nick Urbanus double and retired Randolph Oduber and Statia. Venditte relieved; Italy would lose, 6-3. [29]

He then appeared in his fifth straight European Championship, the 2016 European Championship. He got the win over France, with two shutout innings (2 H, 5 K) between Carlos Teran and Pugliese. Relieving Escalona in the 4th with a 3-2 lead over Spain, he allowed one run in three, when Fernando Martínez's sacrifice fly scored Engel Beltre then turned it over to Teran. He was excellent at containing the champion Netherlands, relieving Panerati with a 1-0 deficit in the 3rd and allowing six hits and fanning three in five shutout innings; Fraylin Florian took over with a 3-1 lead but Da Silva was denied the win when the Dutch rallied. Italy finished third, behind the Netherlands and Spain. [31]

The Brazilian was 3-2 with 3 saves and a 2.43 ERA for the 2016-2017 Cardenales, then was 2-1 in the postseason. [32] In the 2017 Caribbean Series, he reinforced the Águilas del Zulia and was 1-0 with three shutout innings, getting the victory over the Tigres del Licey and Juan Grullon. He pitched for Italy in the 2017 World Baseball Classic but the geniuses at MLB erased historical stats from the WBC site (in early 2020; still unavailable as of August 2021).

After representing Italy from 2009-2017, he played for Brazil for the first time in 16 years when he was with them for the 2019 Pan American Games Qualifying Tournament. He took the loss against Mexico, going four innings and allowing eight hits, two walks and four runs (four earned) before Leonardo Oliveira relieved. [34] He was back with Durango that summer, but struggled (3-9, 10 Sv, 6.36) for the first time in his career since he played in Taiwan 15 years prior. He tied for 10th in the league in losses.

The Mexican League was back in 2021; he was 3-4 with 2 Sv and a 6.29 ERA, though that handily beat the team ERA of 7.32! He then returned to San Marino for the 2021 Italian Series. In Game 1, he allowed a tying 9th-inning run to Bologna when Osman Marval singled in Filippo Agretti but got the win over Elián Leyva in the 12th inning; he allowed only one run in five. He started Game 4 and tossed a gem (4 H, 12 K in 8 IP) to beat Alex Bassani, the 2020 Italian Series MVP. He was named 2021 Italian Series MVP; he led the Series in wins and was 2nd in ERA (.15 behind Henry Centeno) and K (16, 2 behind Centeno). [37] </ref> He pitched twice for Italy in the 2021 European Championship, his sixth Euros (having missed 2019). He started against Belgium and went four innings, allowing five hits, a walk and three runs (all earned) while whiffing six. Angelo Palumbo took over with a 7-3 lead and got the win as Da Silva had not worked enough innings. The veteran still got the nod against Spain in the Bronze Medal Game, facing fellow AAA veteran and globetrotter Leyva. The two traded goose eggs for six innings; Tiago scattered seven hits, walked only one and struck out two before Matteo Bocchi relieved. Bocchi would get the 2-0 win as Italy scored after Leyva came out. He finished with a 2.70 ERA and no decisions over his two starts (only Joey Wagman had more starts in those Euros). He led Italy's staff in innings and was second in strikeouts, two behind Claudio Scotti. [38]