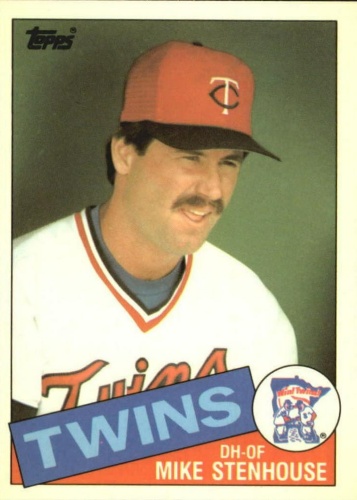 Mike Stenhouse was a college star who won several prominent awards in the minors, yet struggled in limited chances in the majors. In the introduction to Mendoza's Heroes, he writes "The only thing I find more astonishing than someone writing a book about below .200 hitters is that I am in a book about below .200 hitters! It just wasn't supposed to end up that way!" Overall, he played 8 years in professional baseball. He is the son of Dave Stenhouse and the brother of Dave Stenhouse, Jr.

Mike was a high school star but turned down opportunities at some of the top baseball college programs like Arizona State University. He opted instead to Harvard University, where he could combine academics and athletics. He twice was picked to the Ivy League All-league team and hit .475 as a freshman in 1977, second-best in NCAA Division I, trailing Glenn Goya by ten points. In the Cape Cod League, he had a bone in his hand shattered when a pitcher tried to bean him in retaliation for a homer. In 1978, he was chosen as a American Baseball Coaches Association All-American, joining Kirk Gibson, Hubie Brooks and Bob Horner.

The next year, he was picked by the Oakland Athletics with the 26th overall pick of the 1979 amateur draft, their 1st-round selection; Oakland had not scouted him but relied instead on reports from scouting bureaus. He was offered only $12,000 by Charlie Finley, who said he couldn't afford more; Mike opted to return to college when the commissioner's office refused his call to take action to make him a free agent. Finley later offered the same amount of money with the stipulation of a September call-up but when this was not put in writing, Mike backed out after initially planning to sign. Stenhouse decided to wait until the next draft and he was selected in the secondary phase of the January 1980 amateur draft by the Montréal Expos. He signed for a $32,000 bonus this time.

Mike debuted in 1980 with the West Palm Beach Expos, hitting .273/~.435/.433. He led the Florida State League in walks (123), OBP and game-winning RBI (12). Mike Laga beat him out as the FSL All-Star first baseman from the Southern division. Stenhouse also went 0 for 3 with a walk and strikeout for the Memphis Chicks in his AA debut.

In 1981, Mike spent all year with Memphis, hitting .272/~.389/.476. He moved on to the AAA Wichita Aeros in 1982, batting .289/~.423/.532. His 101 walks were second to teammate Ken Phelps in the American Association. He also was fifth in runs (94) and tied for 7th in homers (25). In his major league debut, Stenhouse came into a game on October 3rd as a 8th-inning pinch-hitter for Roy Johnson. Don Robinson struck him out, then followed by whiffing Gary Carter and Tim Wallach to put Stenhouse in good company.

With Al Oliver at first and an outfield of Andre Dawson, Tim Raines and Warren Cromartie, Stenhouse had little chance of cracking the Expos' lineup in 1983. Stenhouse tore up the American Association again that year, hitting a dazzling .355/.490/.681 for Wichita to lead the loop in average, slugging and OBP. He drew 95 walks, second to Dave Stegman's 100. He was third in RBI (93), hit 25 homers and tied for third in runs (93), only 3 behind the leader, teammate Mike Fuentes. He was honored as the AA's All-Star first baseman and MVP, the Expos minor league Player of the Year and the Topps Minor League Player of the Year.

With the Expos, though, Mike was just 5 for 40 with 1 double and 4 walks. His first game left a bad taste with manager Bill Virdon too. Batting in the bottom of the 8th with two on, one out and a tie game against the St. Louis Cardinals on July 28th, he faced Bruce Sutter. He fouled one pitch into the third-base dugout. Sutter followed with a split-finger fastball chest-high; Stenhouse swung too soon in his haste and hit the ball off the end of his bat. He couldn't tell where it went and looked into the third base dugout, thinking he had hit it there again. Instead, it had been a grounder to 3B Ken Oberkfell, who started a 5-4-3 double play. Stenhouse barely made it out of the batter's box. Virdon was obviously unhappy.

The club suggested Stenhouse play in the winter leagues but he refused, going home to work with his father and brother.

Returning to the Expos, Mike struggled much of the year, hitting only .189/.289/.297 overall in 80 games as a backup corner outfielder and first baseman. Only his ability to draw walks (26 in 205 plate appearances) was positive. Oddly, he had a .302 average and 819 OPS with none out, .185 and 581 with one out and .078 and 403 with two outs. Unlike many bench players, his statistics were not hurt significantly by pinch-hitting duties as his PH line was similar to his overall stats.

On January 9, 1985, Stenhouse was dealt to the Minnesota Twins for Jack O'Connor. It would be his only full season in the major leagues. Mike started the year as the DH, but Roy Smalley III quickly assumed the role while recovering from an injury after three games. With Greg Gagne playing well at shortstop, Smalley remained the main DH with Stenhouse back in limited duty. On July 9th, he hit a line drive that broke the rib of Nate Snell. Overall, Stenhouse batted .223/.330/.335 for the Twins with a 79 OPS+. His OBP was better than the American League average but his lack of contact and mid-range power (5 HR in 179 AB) left him with a disappointing performance for a DH/OF playing in the Metrodome. Minnesota then dealt him after the season to the Boston Red Sox for Charlie Mitchell.

A free agent, Mike signed with the Detroit Tigers. He produced at a .280/~.392/.426 clip for the 1987 Toledo Mud Hens, drawing 63 walks as the main first baseman. He never made it to the Tigers' major league roster though.

Stenhouse later said that the "worst hitting instruction I got was when I got to the big leagues."

After finishing up as a player professionally, Stenhouse toured with brother Dave on Bill Lee's barnstorming Grey Sox club. He was an announcer for the Expos in 1996.