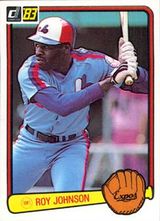 Roy was at Tennessee State University at the same time as Terry Blocker and came to the majors only a few days after he turned 23 years old.

The 1982 Expos had Andre Dawson, Tim Raines and Warren Cromartie as regulars in the outfield, with Terry Francona as the 4th outfielder. Johnson got into 17 games, getting his first shot when Dawson went on the disabled list for a few days in July. He did well in a few games, but when he came back to stay in August, manager Bill Virdon hardly used him and he had only 32 at-bats for the season, hitting .217. He was compared to Dawson and Ellis Valentine when he first came up and was expected to become a big star. That season, he also hit .367 with a .561 slugging percentage for the Wichita Aeros, winning the American Association batting title.

Roy had grown up in tough conditions with a single mother, but after she passed away, he fell into bad company after the 1982 season, leading to substance abuse problems. Years later, after he got clean again, the Expos offered him a job doing manual labor at their minor league training complex in Florida to keep him away from bad influences.

Johnson returned to Wichita in 1983, but missed time due to the substance abuse that effectively killed his prospect status. He played for the Indianapolis Indians for most of 1984 before getting a late season call-up to Montreal. In 1985, he made the team out of spring training, because he was out of minor league options, but was sent back to Indianapolis in mid-April and never came back to the big leagues.

In 1986 he played for the Double A Huntsville Stars and Triple A Tacoma Tigers in the Oakland Athletics, organization, hitting over .340 for each team. He played for Tacoma in 1987 and 1988 as well, but only hit around .250. Johnson also played in Mexico, hitting over 100 home runs for Campeche. He later became their hitting coach. He died in 2009 of a heart attack in Campeche.